My family and I went on vacation last week to South Dakota. Before I left, knowing that when traveling I like to try different local beers, I tweeted my virtual friend @BryanDRoth asking if he had any South Dakota bloggers in mind for his "Six-Pack Project". I was hoping he had someone I could ask for suggestions on South Dakota local craft beer to try.

He answered that he didn't. He did suggest that I could provide research for South Dakota Beers. Not really what I was after, but I figured I would at least be able to share my beer experiences there.

While in South Dakota, we did all kinds of cool things.


We camped in Custer State Park. 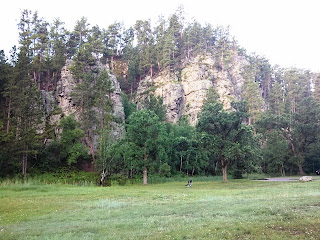 We toured a control / launch center for the old Minuteman Missiles. 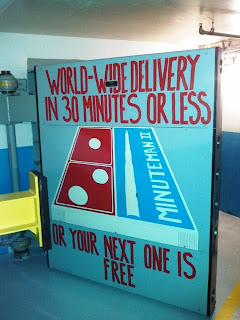 We went to Badlands National Park. 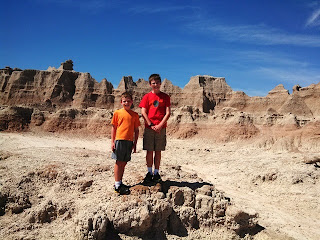 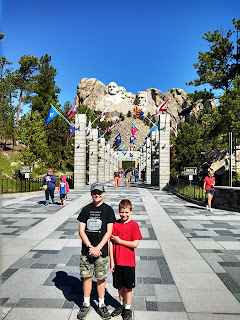 We also looked for local South Dakota Craft Beer. Ok ... well ... one of us did that. We ate at various restaurants and I popped into quite a few liquor stores. I was constantly looking for local craft beer. It is sort of what I do.

It is absolutely disappointing what I found. Or ... more to the point ... what I didn't find.

I actually found lots of Colorado Craft Beer. There was quite a bit of Oregon Craft Beer. Most places had no South Dakota Craft beer. The places that had any only had one or two. Shameful really.

But, for what it is worth ... here is my official South Dakota Six Pack: 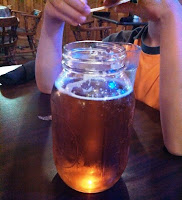 #1 ... Crow Peak Brewing Company 11th Hour IPA. The first SD craft beer I found on our trip was actually 4 days into the trip after we were done camping. We had checked into a cabin and actually ate out to dinner in the only bar/restaurant that was close to us. The waitress recited the on-tap menu. The final choice she mentioned was this one. She didn't know much about it other than "they tell me its hoppy". Of course I had to try it. I was disappointed, because I would not really call this IPA hoppy, but I think maybe I'm going to give this one the benefit of the doubt. I think this might just be that this bar didn't sell this beer all that fast and my sample was a bit old and maybe the hop character had faded. I did order this beer again next time I was in this bar.

NOTE: I never saw 11th Hour IPA in a bottle or can, so I don't know if it is actually packaged. I am assuming it is for the purposes of this blog post. If you know better, please let me know. 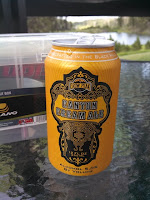 #2 ... Crow Peak Brewing Company Canyon Cream Ale. I found this beer in a couple of places. I actually picked it up the 2nd time I found it, thinking the first time "surely I can do better than a Cream Ale for this 6 pack". Turns out that thought was incorrect, so the 2nd time I actually grabbed it. To be honest, I was pleasantly surprised with this one. Cream Ales are obviously not my favorite, but I thought this one had good malt flavor. For a gateway beer, it was awesome. My wife really liked this as she is obviously not a hop-head.The website says "

This is a light bodied ale, malty dominated with a slight sweet flavor.
This sweetness is from local honey added at just the right time" 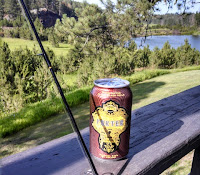 #3 ... Crow Peak Brewing Company Pile-O-Dirt Porter. I picked up this beer at the same time I picked up the cream ale. By far, this was my favorite of the local craft beers I had in South Dakota. It is also the local beer that popped up the most during my searches in bars, restaurants, and liquor stores. It is a medium bodied beer that has just the right amount of roast. Lots of chocolate dominates the flavor and aroma. I easily drank more of this than any other South Dakota beer. 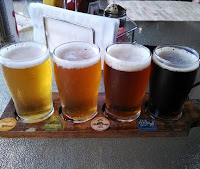 #4 ... Bulgin' Bull Restaurant and Sports Bar flight of four beers. Bulgin' Bull was a restaurant we tried in Custer, South Dakota with my wife's dad and families of her sisters after going to Wind Cave National Park. It was a cool sports bar and we had fun on the roof. These beers, while having the name of the bar are actually not brewed there. In fact, according to the waitress, they are brewed in Montana (she didn't know which brewery). I only include them here because there are such slim pickings for South Dakota Beers. 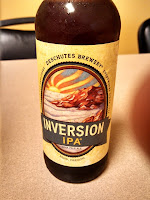 # 5 ... Deschutes Brewery Inversion IPA. So, unfortunately, to fill out my "South Dakota" 6 pack, I now have to move on to beers brewed in other states. As I mentioned up above, I found lots of Colorado Beers, but I already have done a Colorado 6 Pack, and I figure I might as well move on to the other state whose beers I saw a bunch. Oregon was well represented in South Dakota.

And, to be honest, I was not all that blown away by this beer. It was a good IPA. I would not characterize it as a great IPA. It was certainly better than #1 on this list, though. 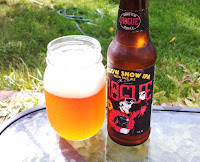 # 6 ... Rouge Yellow Snow IPA. And, yes, there are still no more South Dakota Beers for the 6th spot in the pack, so I'm going to go with another Oregon beer. Sad, I know, but I don't really have any other choice besides the Colorado Beers I brought myself.

From the Rouge website: "Pale golden in color with a hoppy fruity aroma. Big hop flavor up front complemented by medium body and hoppyness mid-pallet. Finishes with a characteristic lingering bitterness."

To be honest, I was not really all that excited about this beer either. I am giving it the same  benefit of the doubt that I gave the 1st IPA on this list. It didn't really taste all that hoppy to me, but maybe I just got an older sample.

And that is the end of my South Dakota 6 Pack. You certainly are not visiting this state as a craft beer destination. There were actually a couple of places I wanted to visit that actually brew their own beer. In Rapid City, we tried to go to Firehouse Brewing Company where I am sure that I would have had beers I enjoyed more than at least some of the beers in this "6 pack". Unfortunately there was some sort of festival going on in the street in front of the brew-pub when we tried to go and we didn't think we could get the 11 people and 5 kids to handle the kind of wait that would have been necessary to get into that place for dinner.

In Custer, I got the group to the front door of Bitter Esters Brewhouse to find it closed. It was going to be opening in 15 minutes, but again, with hungry kids and another decent restaurant right next door, I had to agree to go to Bulgin' Bull. Had it just been my family, I probably would have waited, but hungry kids took precedence over my desire to try local beer.

So, there you go. My report on the South Dakota craft beer scene is basically that there is none. Obviously, I was a visitor in a strange land with other things to concentrate on, so I am very unqualified to make an informed description of out-of-the-way local beers. Maybe someone who comes across this post can educate me. Leave a comment below.

Despite the craft beer disappointments, I had a great vacation in South Dakota. I completely endorse the Black Hills area as a place to take a family vacation.
Posted by ESheppy at 7/29/2013 06:16:00 AM