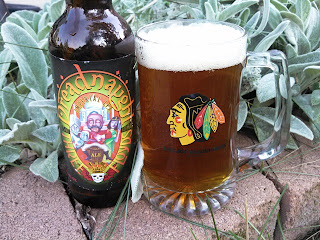 When we went to South Dakota last month, we met my wife's sisters and their families about mid-way through the week. They all live in Illinois, and knowing that they had better access to 3 Floyd's Brewing company, I asked them to try to pick up some Zombie Dust. Zombie dust is one of the beers on the Zymurgy's 2013 Best Beers in America list that I am trying to drink my way through.

My brother in law made a heroic effort, but apparently, they don't live quite close enough to the Chicago Land area to get 3 Floyd's beers by them. He even made a road trip to a good craft beer store in attempts to pick some up.


Apparently, this store did not have Zombie Dust. My brother in law did not want to leave the beer store empty handed, so he talked to the store owner about what other beers I might be interested in.


Between the two of them, they decided that my Brother in Law should purchase a bomber of Dreadnaught Imperial IPA to bring to me when we met in South Dakota.

According to the 3 Floyd's website, Dreadnaught is "A hophead’s dream beer. This Imperial India Pale Ale has an opening salvo of mango, peach and citrus hop aromas that sit atop a pronounced caramel malt backbone. Although Dreadnaught is a strong and intensely hoppy ale, its complex flavor is both smooth and memorable."

It was, of course, an awesome beer.

Its color was a beautiful gold with a long lasting white head that stuck around for the whole glass. The lacing was awesome.

The citrus and tropical fruit aroma practically punched me in the nose (in a good way) with lots of mango, pineapple, grapefruit, peach, and (maybe) a bit of pine.

The flavor starts off with some bready malt sweetness which quickly gives way to the flavorful fruitiness of the hops. It finished with a firm, but clean bitterness that gets the taste buds ready for another swallow.

This beer is everything an imperial or double IPA should be. Very delicious. Awesome beer.

When I asked the family to try to track down Zombie Dust, I honestly did not think it would be hard for them to find, and I certainly did not intend for my brother in law to go to such trouble trying to track it down for me. I do really appreciate the lengths to which he went to try to help me on my beer-drinking quest. It is awesome to have married into such a nice family.

Of course drinking the Dreadnaught did not let me check anything off my list, but I am extremely glad I got the pleasure of trying it.

According to the GABF list of breweries, 3 Floyds will be there this year. Hopefully they will bring some Zombie Dust for me to try.

The beers I still need to try are still:

Of course, you can always check the latest on my quest to drink the beers on this list by going to this link:
http://blog.ericshepard.com/search/label/Zymurgy%20BBIA 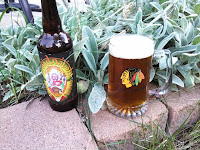