Beers and the BallPark

A few weeks ago, I was rewarded with 4 Rockies Tickets. I know ... seems more like a punishment, right? The game was this past Sunday. My kids didn't want to go to the game and I didn't feel like forcing them. My wife didn't think we should leave them at home alone. Plus, we had a church thing that at least some us of should be at.

Long story short, I ended up going to the game alone (is that as pathetic as it sounds to me?)

But, as I was going to be without children, I figured I might as well head downtown early and hit a couple of the breweries by Coors Field. What better way is there to prepare for a game than to sample some Denver Beers? 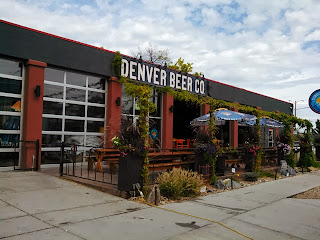 I've been to the Denver Beer Company before (see Weekend Sans Kids), but one of the awesome things about this particular brewery is that they don't have any "regular" beers. They have a couple that they brew a fair amount, but most of the time when you go into the taproom, every tap will be something different. If you are a Promiscuous drinker like me, you love the extreme variety of beer they put out.

As I told the bartenders, they are basically a big home-brewery. 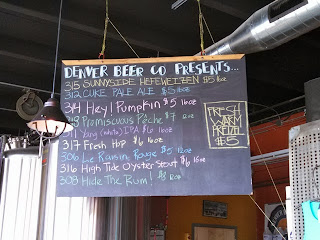 Sunday, they had 9 beers on tap. I got two sampler "flights" of four. If you were following me on untappd Sunday, you saw me check-in lots of of these samples. If you don't follow me on untappd, feel free to send me a friend request: https://untappd.com/user/esheppy

First, I tried their "Cuke Pale Ale". I've never had cucumber in beer, and I was very curious to taste this. Yes, it is a pale ale flavored with cucumber. Honestly, I really liked it. As I scan some of the other untappd comments on this beer, most people are not really fans, but I thought it was great. It was crisp and refreshing with a little cucumber flavor. You might think that is weird, but if so, you are probably not into testing the limits of beer. You probably aren't as Promiscuous as true beer geeks.

Next up was "Hey! Pumpkin". This is a rich, smooth beer. There is a bit of pumpkin flavor, with not as much pumpkin pie spices as you usually get in pumpkin beers. This is exactly how all pumpkin beers should be. I knew this would probably be my wife's favorite of the flight, but sadly she was not there. Again, I thought this was a great beer.

Then, I had a "Promiscous Pêche". It is listed as a Farmhouse / Saison. It had nice orange and maybe coriander, which made me think I was drinking a wit. This was not my favorite, but was certainly good. This almost certainly would have been my wife's second favorite.

The last of the first "flight" was "Yang White IPA". I think this is my first white IPA. I've often thought that Belgium wit hopped up with American citrus Hops would really be a great combination. I've even designed a White IPA recipe to homebrew, but this is the first opportunity I've had to taste one. I was not disappointed. This was my favorite beer of the day. Just as I suspected, the witbier flavor with American hops really complimented each other.

The next group of 4 started with their "Fresh Hop IPA". They personally traveled to the Western slope of Colorado to hand pick 30 pounds of Chinook hops for this beer. I have not had a lot of experience with Fresh Hop beers, but this is the best I have ever had. It was absolutely wonderful. Lots of hop flavor with no harsh bitterness. Great.

Then, I had their "Le Raisin Rouge". This beer really did a great job of showcasing the dark fruit raisin flavors of C120 and/or Special B malts. In fact, I have never tasted a beer tasting exactly as raisiny (in a good way) as this beer. The bartender was nice enough to go check out the recipe and confirmed that it was accomplished with lots of caramel and Special B. Again, another wonder beer.

Next up was their "High-Tide Oyster Stout". I've never had an oyster stout before (unless you count Rocky Mountain Oyster Stout). Actually, it tasted like a nice smooth full bodied stout. I would not have said "oyster" at all had it not been in the title of the beer. This is a good thing, I think. 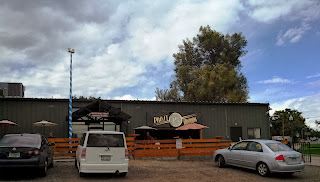 After I said goodbye to my bartender friends at Denver Beer Company., I traveled up the hill, over the highway and north to Prost Brewing Company. Since this brewery has opened a little over a year ago, I have been telling myself I need to come by. I am ashamed that I have not been until Sunday. Or at least I was ashamed.

A tidbit that I discovered walking up to the brewery is that Prost offers free parking for Rockies Games. Good to know in the future. 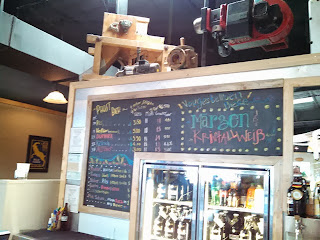 As you may be able to figure out from the name, Prost is a brewery that concentrates on German-style beers. Actually, all they brew are authentic classic German beers. They actually embrace the Reinheitsgebot. And they do a great job.

Again, I got samples of all their beers.

First, I had their Kölsch, which is not in the photo below. I drank it while the beer maid was pouring my other beers. I even forgot to check it into untappd. It is as a Kölsch should be. Light, refreshing. Less hoppy than a Pils. More hoppy than a Helles. Nice solid beer. 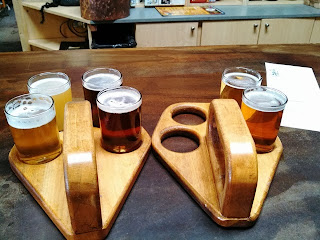 Next, was the Prost German Pils. This was my favorite at this brewery. If I would have had time for a pint here, this is the beer I would have chosen. I thought it was a perfect German Pilsner. If I ever make one, I hope this is what it tastes like. The combination of German pilsner malt with Nobel hops was fabulous.

Then I had Weißbier. This was my least favorite at Prost, but that is just because I am not really a fan of Hefeweizen beers.

After the Hefeweizen, I had the Altfränkisches Dunkelbier. This was a rich, malty amber beer. It had a nice balance with lots of bready Munich malt flavor. It was exactly what I thought a Dunkle should be.

And then, I tried their Altbier. It was a bit lighter in malt flavor, color and body than the Dunkle. It was also more bitter with a nice kick of hops at the end. It was very tasty. Probably my second favorite at Prost, and depending on my mood might edge out the German pils other days.

Next, I had their Kristallweijb. Another wheat beer. I liked it better than the Hefeweizen. I wrote in untappd: "Not really familiar with this style. Light and crisp. A little clove and bannana. Sort of a Belgium wit ... only more German. Good."

Finally, I sampled the Prost Märzen. This is obviously their Oktoberfest seasonal. It was another solid, yummy, perfect-to-style beer. I would love to drink this by the liter. Actually, I would love to see this beer at the Denver Oktoberfest instead of the Sam Adams they usually serve, but I doubt that is going to happen. I'll have to come back here for my own little Oktoberfest celebration. 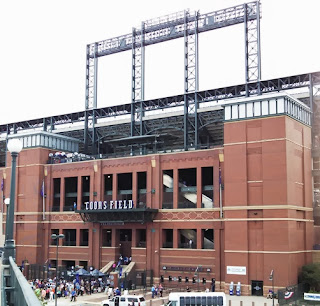 After I was done with the Prost sampler flight, I headed back over the highway to Coors field.

On my way in, I stopped at the Sandlot Brewery inside the ballpark. I had a "Last Straw", which they told me was a Farmhouse ale. I didn't think so. It was pretty good, though, not your typical Coors beer. 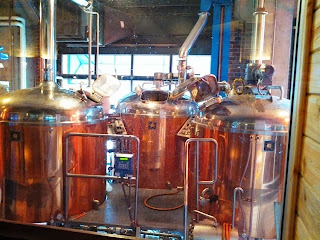 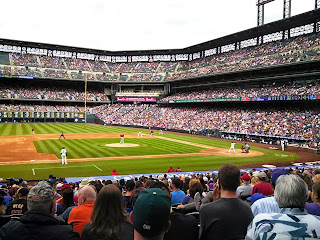 Later I tried the Coors Field 20th Anniversary Ale. I actually thought it was pretty good. Had they not named it an ale, I would have called it a per-prohibition lager. Actually, I did call it that. 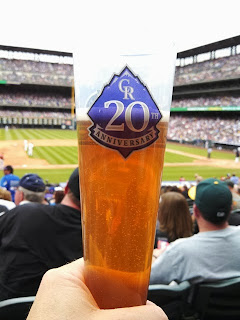 The game itself sucked. I don't know about you, but it is getting old seeing the Rockies end in last place every year.

Anyway ... that was my Sunday. The beer was good. The baseball was bad.