I brewed Eric's Irish Red on Sunday. With all the attention I've been paying to new styles (see BJCP goal), I have really not brewed a lot of my old favorites this year. Since all I have left is Category 12 Porter and Category 19 Strong Ale to finish up before the end of the year, I though now would be a good time to brew one of the SheppyBrew flagships.

Eric's Red is one of those recipes that has been around since my Mr. Beer days. It has obviously changed quite a bit over that time, but I really like the all-grain rendition that I have come up with, and the only difference between this time and last time is the yeast selection. This time I used London Ale Yeast harvested from Jolly Morlock Porter, just because the timing was right.

I was up at 4:00 for brew day preparation, and I had the mash completed before 6.

The only problem with starting so early is that pictures don't really capture the beauty of the mashing grains and the draining wort or even the start of the boil. 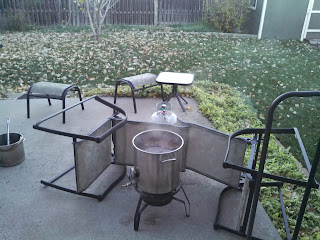 Everything went well. The pre-boil gravity was high, which I got on-track by adding more water during the boil. I even remembered to add my bittering hops at 50 minutes left in the boil instead of 60.

At one point during the boil, the wind blew out the flame, but I think I recovered from that quick enough that it didn't cause any issues. 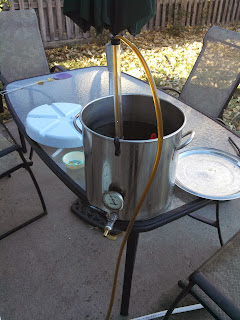 I got the wort cooled to about 70 and then let it sit while I went off to church. 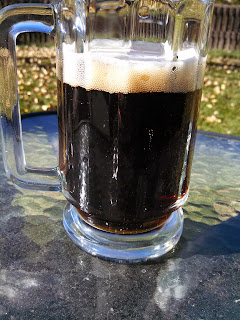 A couple hours later, I pitched a pretty good amount of harvested yeast from Jolly Morlock Porter. The beer was bubbling by the next day.

The hot - and heavy part of the fermentation is already done. The beer is a bit hazy still. Hopefully that clears out in the next couple of weeks.

I am hoping to save this to tap right around Christmas to share with guests. We'll see how that goes.

Chances are, I'll let you know either on this blog or SheppyBrew's Facebook Page or Twitter or somehow.