Fall Back ... Brew a Morlock Porter

Until about mid-week I was not planning on brewing today. Between it being the end of Daylight Savings time (giving me an extra brewing hour) and there being no Bears or Broncos football games, I thought it was just too opportune a day not to do it, though. Plus, yesterday was the AHA's Learn to Homebrew Day. I can't not brew on the weekend of Learn to Homebrew Day, can I?

Of course I can't.

So, I quickly put together a porter recipe. As many of you know, one of my 2013 goals was to round out my brewing experience, by making sure I had brewed at least one all-grain batch of all 23 BJCP beer categories (see SheppyBrew Styles). At the beginning of the year, I had brewed just over half, so brewing 11 was not that big of an undertaking. All I had left as of this morning was Category 12 Porter and Category 19 Strong Ale.

Now, I only have the Strong Ale left. 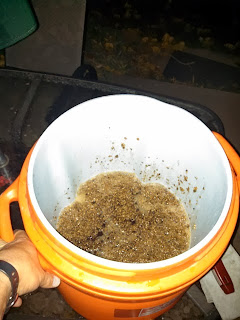 So, today I brewed Jolly Morlock Brown Porter.<-- follow that link and you can see the recipe.

I got started real early. My goal was to have the beer in the carboy before 8AM when I had to leave for church. The extra hour I got back from the end of Daylight Savings Time really helped out. I got my mash at the perfect temperature by 4 AM, and then took a nap. This is the first time I've ever taken a nap while brewing. It was sort of nice.

I got up refreshed, sparged the wort into the brew kettle and had the boil going by 6 AM. My pre-boil gravity was perfect, although the volume was a bit low. The boil went as planned. 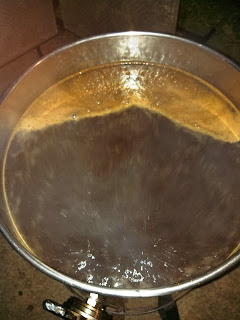 After my typical hour and a half boil, I chilled the beer to 78 or so and racked into the carboy. Then, I put the carboy in ice water to further cool. My youngest son and I headed to church to meet my wife and oldest son who had spent the night for a Confirmation "retreat". 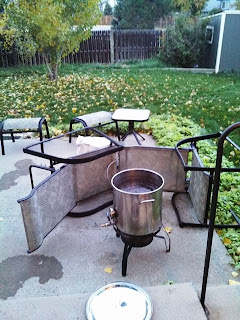 When we got home from church, the wort was at 58 degrees. I pitched the yeast and am now waiting for things to get started. I should have good activity before bed tonight. As I pitched so low, I am not actively cooling the fermentation at all.

I am looking forward to having this beer in a month or so.

Now that I've done a porter, the only beer category I have left is 19. STRONG ALE. This will be an American Barely Wine (19C). I think I'll wait until December to brew that one, so my next few batches will be whatever I feel like drinking. But who knows? Maybe I'll get it over with and declare my goal accomplished!

Now, I'm not sure what to do with the rest of the day. I am not real interested in the football games that are on here in Denver (until tomorrow night of course). I'm done with the brewery clean-up and even have this blog post done (or will in a few minutes). I'm thinking it would be a great day for a bike ride.