I have not done a post for "The Session" (aka Beer Blogging Friday) since May. Not sure why. Just have not been into it. I did just tell myself that I should get back into the habit. November's topic sneaked up on me, but it just seemed too good to pass up.

Is "sneaked" really the past tense form of "sneak"? I thought it was "snuck", but the FireFox spell-check likes "sneaked" and does not like "snuck". I suppose I could look it up in a real dictionary ....

This month, November, the topic comes from Nicole (aka Nitch), who does a beer blog called "Tasting Nitch". Her topic is "Women and Beer: Scary Beer Feminists or a Healthy Growing Demographic?" You can read all about it at: The Session #81 Announcement- Scary Beer Feminists!

"Feel free to write about what you want as long as it is beer and woman related!"

I do know some Beer Feminists. I just don't find any of them all that Scary. In fact, chicks who like beer are generally extremely nice and have awesome senses of humor. Good Beer makes people happy whether or not they are male or female. Generally speaking ... when people are happy, they are not all that scary. Does that make sense, or do I just not know any of the Scary Beer Feminists?

To be honest, I have a hard time understanding why it is such a big deal that more and more women are becoming beer geeks and/or that more women are getting involved in the craft beer industry. Some women (are you ready for this shock?) are even brewing. Can you imagine that? Of course you can. Really, why would this be a surprise?

I'm not going to point out that historically women were the brewers.

I'm not going to point out that women have better beer pallets than men.

I'm not going to point out that many women love to cook and brewing is a lot like cooking.

I don't have to point these things out. I hear them all the time from the people out there making a big deal out of the increase of women in the world of beer.

As I am chiming in late, I have the benefit of reading some of the other posts on this topic. So far, all the other ones I have read say sort of the same thing. There is no reason women should not be part of beer culture and/or the industry. No big deal.

But ... the truth is ... there is a gender gap in the Beer World. There is absolutely no reason there should be, but there is. I'm sure that if I wanted to, I could look up the demographic numbers. They are out there. A very low percentage of women drink beer compared to the number of men who drink beer.

I guess I don't really pay that much attention. If you are a regular reader of this blog, you know that I attended the Great American Beer Festival a couple weeks ago. As far as I know ... this is the only place in the UNIVERSE where the women's restroom line is non-existent compared to the line for the men's restroom. My wife literally walked right in. My line was huge. I honestly didn't notice the lack of women walking around the hall, but obviously there was a small ratio of women to men if there was no female restroom line. 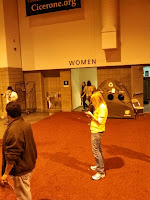 And as I look back through any of my GABF pictures, it does look like the overwhelming number of humans in any crowd photo are dudes.

Again, I it didn't really strike me. Probably had something to do with the fact that the person I looked at the most is most definitely a woman. 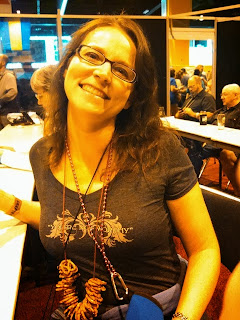 Maybe part of the reason I don't notice the lack of women in the beer scene is that my wife (aka the SheppyBrew Beer Model) is also a beer geek. Also, most of the women I consider friends drink beer. Granted, very few (if any) drink as much beer as I do, but that is true of most of the guys I know too.

And again, I cannot think of a single reason women would not or could not drink beer or make beer.

Lots of people complain that beer has not been marketed to women, which I guess is true. But I don't really drink beer that has been marketed to me. I refuse to believe that people are stupid enough to drink something only because a clever commercial says you should.

I could probably ramble on and on about women and beer, but I am already late posting this, so I'll cut it short. More and more women are joining the craft beer world, and I think that is great. I think it is great that more and more men are joining in as well.

Hopefully, eventually, it will all be 50-50 as it should be.