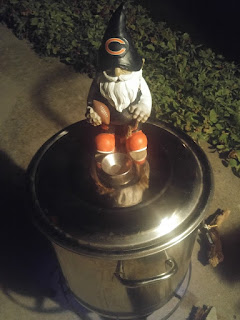 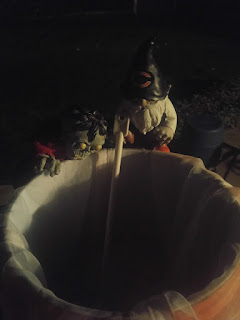 I added water to the pumpkin and heated the "soup" to about the same temperature as the mash so that adding it wouldn't affect the temperature. 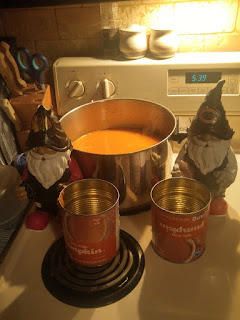 The grains mashed on their own for about 45 minutes. The pumpkin / grain mixture went another 30 minutes or so. 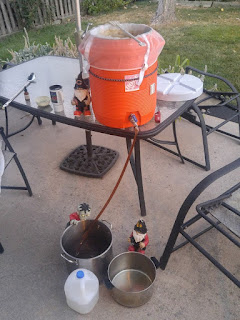 Collecting the wort went very smoothly. I used a grain bag in case there was a problem with stuck sparge, but that was not an issue at all.

My pre-boil volume and gravity was pretty much right-on. 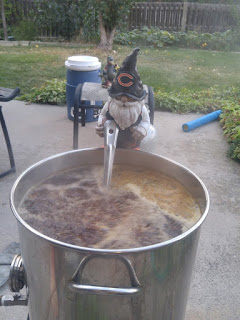 The boil went smooth as well.

I chilled to about 80 degrees before I had to run off to church, so I left the wort sitting around covered outside until I got back. Probably not the best practice, but I didn't pick up any noticeable off-flavors while I was away.

When I got back, I chilled to about 60 degrees by putting the fermentor in an ice bath. 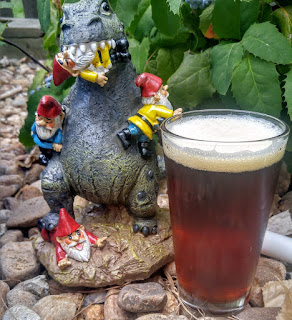 Today, the beer is actively fermenting in the lower 60's. I will probably put the beer in a secondary fermentor along with more pumpkin pie spice in about a week.

I should keg the beer towards the end of the month. That will give the beer plenty of time to "condition" until Halloween, which is usually about the time that the SheppyBrew Beer Model starts to drink Pumpkin Spice Beers.