I brewed a peppermint (X-Mas) ale 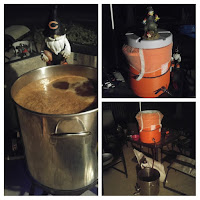 Not too long ago, I asked the beautiful SheppyBrew Beer Model what sort of  X-Mas Ale I should make this year.

Her favorite of the X-Mas Ales so far was the 2012 version, which just happened to have peppermint flavoring in it. The peppermint with the winter warmer made the beer sort of a chocolate candy cane.

And, when I asked, she told me this again.

So, I decided to make the 2016 X-Mas Ale with peppermint flavor.

Of course, peppermint is one of those flavors you have to be careful with. Too much is ... well too much. Too little is ok, but if you are making a peppermint beer, you want people to be able to tell you put peppermint in it.

Luckily, I've had experience with peppermint. I simply copied the amount I used in 2012. 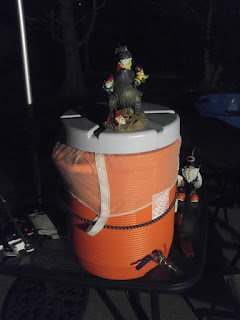 The base beer is different than any X-Mas Ale so far. Last year, I started adjusting the recipe to include less crystal malt and replacing it with dark Munich malt. My 2016 recipe has more Munich than 2015. It is also designed to be significantly lower in alcohol. 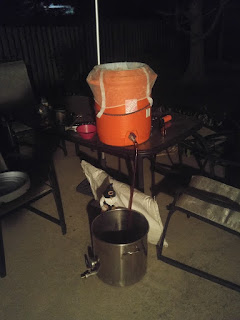 Actually, I started late last night. I did my mash starting a little before 11pm. I got up early in the morning and collected my wort. I had the boil started before 4:30 AM. 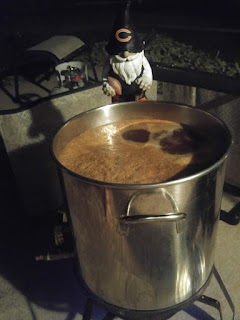 The boil was done around 6 and I had the wort in the fermentor before 7.

I've pitched and even done most of my cleanup. The rest of the day is open for other activities. 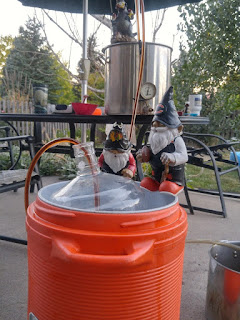 Usually by the time I write these brew day posts, the fermentation is well underway. I'm still waiting for this batch to really take off. I expect it will before too long. I had lots of Kölsch yeast and an active starter that I pitches with. This beer should really take off soon.

Of course, as always, I'll let you know how it goes.