O is for Our Mutual Friend Brewing Company

It has been a couple weeks since I posted N is for New Terrain Brewing Company.

I did C is for Comrade Brewing Company; H is for Hogshead Brewery; K is for Kokopelli Beer Company.

There are currently a total of  15, all of which you can review by looking at Sheppy's Blog: A to Z.

The most recent one was N ... N is for New Terrain Brewing Company.

If you know your alphabet (or read the title) you probably can figure out that the letter O is up next.

O is for Our Mutual Friend Brewing Company 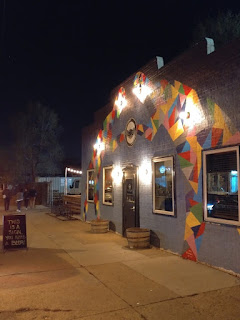 
Our Mutual Friend is an award-winning brewery & taproom located in the River North neighborhood of Denver. For us, brewing beer began as an excuse to gather with our friends and ruminate on life, philosophy, music, food, and of course, beer. Once we got started, we grew more curious about the brewing process, honing our craft & experimenting with different methods & techniques. Along the way a fundamental question to our process was, how can we do more of this ourselves? Our desire to participate in every step of the grain to glass process led us to open Our Mutual Friend.

The SheppyBrew Beer Model and I had dinner in LoDo on Wednesday night before Thanksgiving. Since I needed a brewery for O and Google maps said we were close, we walked down to the River North area of Denver to OMF.

Interestingly, I believe this is my first after-dark review in this A to Z series.

It is a cozy little spot. There are tons of breweries in this area, some of which I've already shared with you (Sheppy's Blog: A to Z) and some of which I will be sharing with you soon ... 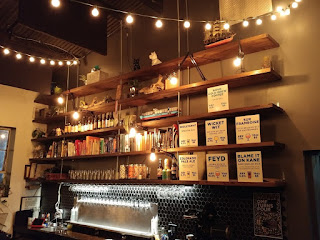 The place was pretty quiet the night before Thanksgiving. They had 6 beers on tap. The Beer Model and I got a flight of 6 and then each got a pint before we left. 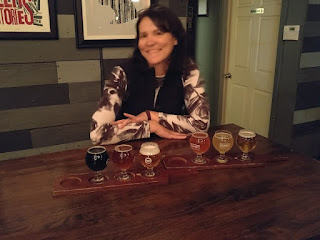 As I mentioned, we finished off with a couple of pints of Proletariat Session Ale.

It was a good time. I suggest stopping by when you get a chance.

If you want to visit, OMF is located at 2810 Larimer Street, which is in the River North Neighborhood of Denver.

There are a bunch of breweries down in that area, so you might as well visit more than one while you're down there.

The taproom hours are: 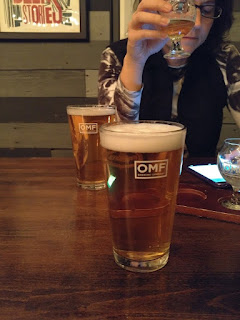 So there you are ... O is for Our Mutual Friend Brewing Company.

Next up in the alphabet is "P". To be honest, not only have I already picked out the "P" brewery, but I visited it before OMF. I'll write up the article and probably post it some time next week.

So, keep your eye on Sheppy's Blog: A to Z ... it should be busy in the next few weeks.

Thanks for reading. Leave comments.