I didn't share this at the time, but when I brewed my 2016 X-Mas Ale (see I brewed a peppermint (X-Mas) ale) ... I had a little too much for the fermentor and moved about 3/4 of a gallon to a glass jug and fermented it.

It has been sitting around since then waiting for me to make Graf (or is it Graff?)

What is Graf (or maybe it is Graff)?

According to the Dark Tower Wiki ...


Graf is a strong hard cider or apple-based beer widely consumed in In-World. The specifics of the beverage are not mentioned (except to say that some varieties of graf are weak while others are eye-wateringly strong). 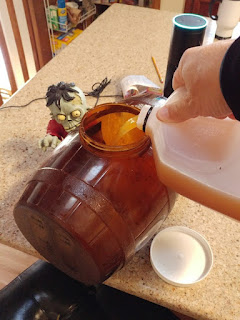 I've read the Dark Tower series and didn't really pick up on Graf until it came up in some home-brewing forums and then Brewing T.V. (see Brewing TV's Gunslinger's Graff).

Basically, it is being implemented as a combination of beer and apple cider. 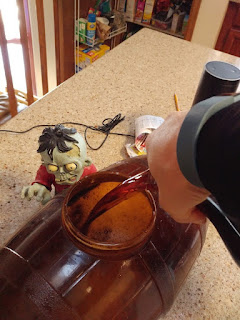 I have been looking for Cherry Cider to do this with, but I eventually gave up and just grabbed a gallon of apple cider from the grocery store Saturday.

I poured the gallon of cider into a Mr. Beer Fermentor. Then I poured the X-Mas Ale on top of it, making sure to include some of the trub in hopes that the Kolsch Yeast would wake up and ferment the sugars in the cider. 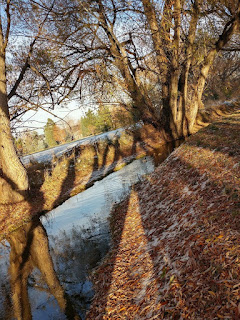