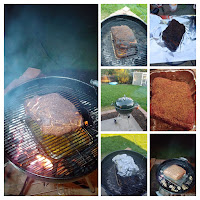 Soooooo ... Remember back in May, I did an Overnight Cook on my Weber Kettle using the snake method.

Set up charcoal around the perimeter of the kettle in a "snake", light up one end, and let it burn. The burning coals will light unlit coals slowly until they are all burned out.

I was able to get over 12 hours of fairly consistent heat this way. Perfect for allowing myself to get sleep while performing a long smoke.

Last weekend, I used this technique again. This time, I wasn't shooting for lunch time, but wanted to be done early afternoon so I could let it sit until dinner while actually doing things on Sunday afternoon.

So, I set up the snake the day before, and got up early in the morning to get started. 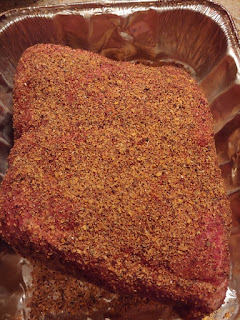 Around 2:45, the meat was on the grill. It took almost an hour of slowly opening vents before the kettle temperature was at 220ish. After that, I let it go. 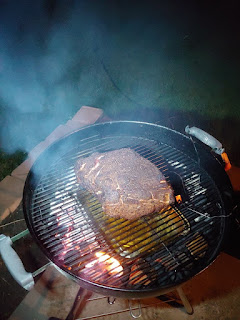 I was up at 5:00 to see the temperature at 276. At that point the internal temperature of the meat was 87. Still a long way to go. 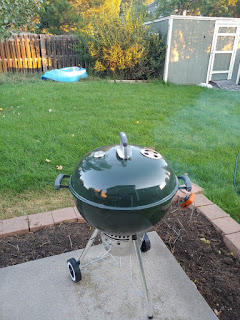 I closed vents a bit, and got to about 250 cooking temperature. Every once and awhile, I sprayed kombucha on the meat. For the most part, I just let it cook. 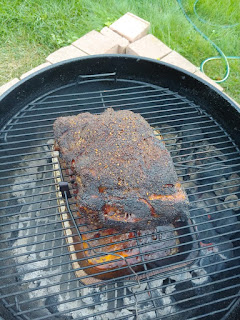 A little after 9:30, the internal temperature was 167 and I decided to wrap the pork shoulder.

At that point I also added more charcoal because I was close to the end of my "snake". 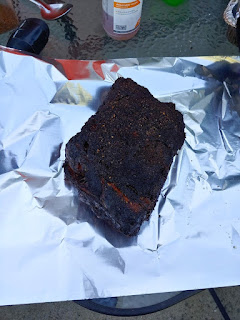 And then, I just let it go.

Sometime before 1 pm I probed the butt for tenderness and decided it was done.

I had it in a cooler wrapped in a towel by 1. 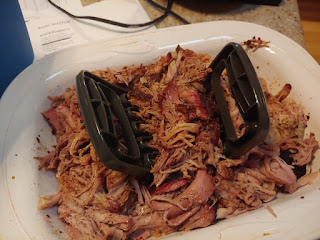 It sat until dinner time around 6pm.

It was still hot. It was awesome. Tender. Juicy. Delicious. I think this was my best port butt so far.