I've been brewing quite a bit lately. 2020 is easily on pace to be my biggest brew year ever.

That doesn't have anything to do with this post. But, I thought I'd mention it. Not sure why.

I made a couple of small modifications to my process of temperature control. Basically, I went back to pumping cold water through my Anvil Cooling System to maintain low fermentation temperature.


The first modification that I made was drilling holes in the cooler that holds the cold water to run the hoses through. This allows me to close the lid of the cooler which helps keep the water colder.

The other one was using bottles of ice rather than ice itself. This means I don't have to empty ice from the cooler as it melts.

Both embarrassing simple changes. I mentioned that I was surprised how much these simple changes made the cooling process better. 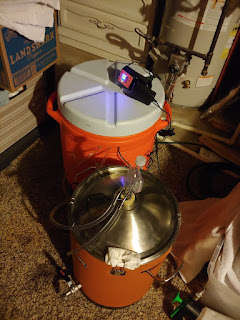 So, part of the reason that I wanted to brew T.Ra.Sh. Light Mexican Lager (batch 256), was to try out the system out on a lager.

And I did try it out.

And it worked great. I had to let the cooling system work several hours to get the wort down into fermentation temperature, but once it was in the low 50's, the system kept it there fine.

Of course, this does mean that I have to remember to change out water bottles. Since I was working at home (COVID), it was easier than it will be when my company is back in the office.

But at least for this batch, it worked well.

Even with the temperature control, I did the fermentation fairly fast compared to how traditionalists would do it. After a couple days at 52ish, I let the temperature rise one degree for a few days until it was at 55.

Then, I forgot to switch bottles and the beer rose into the 60's. Fermentation was at a point that I would have let it rise to that level in a day or two, anyway, so it really wasn't too big a deal to me. 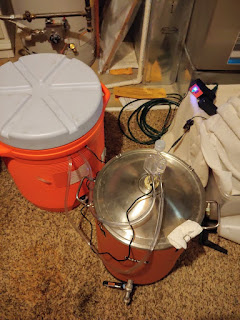 And I did a sort of long clean-up rest while waiting for keg availability.

So, I'm still doing the faster lager process, but I am better controlling the early temperatures with the system.

Now... if I can only figure out a way to not forget to change the bottles.