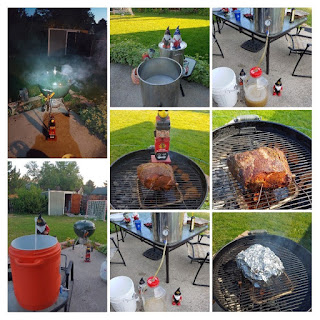 This is the 7th time I've brewed the Hail Storm Summer Saison.

I also had a pork shoulder in my freezer left over from a Sam's Club two pack. I decided to make that Sunday too.

I was up a little after 4AM to get started on the pork butt.

It was a little smaller than last time, but it also was not completely thawed, so I got started pretty early.

The meat was on the kettle a little before 5AM. Interestingly, the internal temperature was cold enough that the probe didn't give me a temperature until it heated up a little. 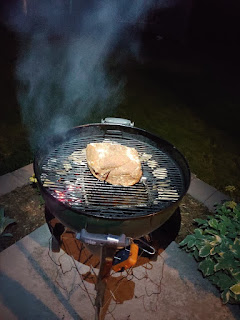 After getting the meat started, I heated up water and had the mash going a little before 6AM.

At this point, my kettle was at 250ish and the internal temperature was all the way up to the point that it actually displayed a temperature (34 degrees). 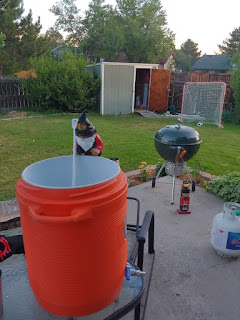 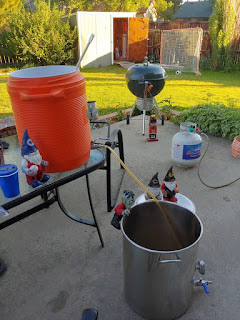 At around 6:40, I started collecting wort. My pre-boil gravity was a little low. I adjusted with a few ounces of table sugar. 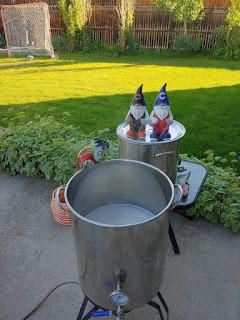 My boil was going by 7:15. At this point, the pork had an internal temperature of 90 degrees. 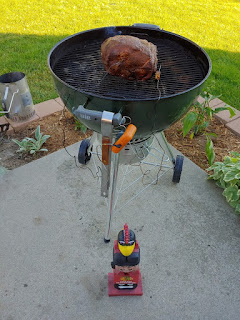 In an hour, the boil was done. I remembered to add everything I was supposed to. At this point, I started a 15 minute "steep" for my "whirlpool hops".

The internal temperature of the meat was at 130. 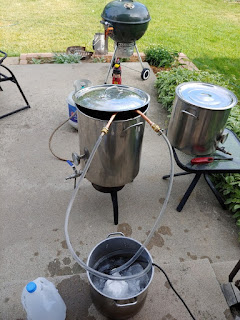 After the 15 minute "whirlpool" ... I started chilling.

This time, I had a new toy. Since the last time I brewed, I invested in a new immersion chiller from Jaded, "The Hydra".

I've been interested in "The Hydra" for quite some time. It claims really fast chilling times.

It certainly was much quicker and more efficient than my smaller, older chiller. I'm not sure it cooled quite as quickly as the claims, but much quicker than I'm used to.

In fact, it was ready for the pond pump and ice before I was. 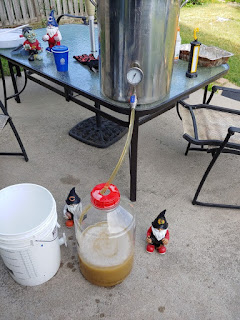 I got the wort chilled into the low 60's and then filled my fermentor. The beer was in my basement by 9:15.

The pork's internal temperature was at 155 degrees. 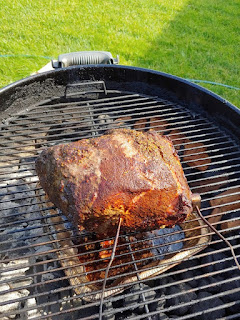 Then, I showered and then headed out for a bike ride.


Two hours later, I returned to find the port at 203 degrees. I pulled it off and put it into a cooler to rest until dinner time.

As always, the pulled pork was awesome.

The beer was bubbling away before dinner time.

And ... the fermentation was been going for a couple days.

I'll be drinking in a couple weeks.