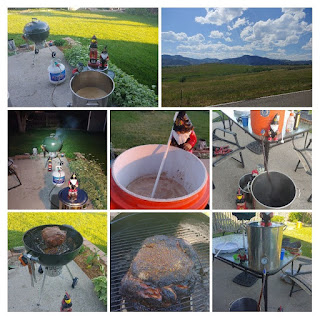 Next up on my Colorado Homebrew 6 Pack list was New Belgium's 1554 Enlightened Black Ale for which, I decided to brew SheppyBrew's Blackhawk Black.

To be honest, Blackhawk Black was never REALLY designed to match the taste of 1554, so I doubt that a side-by-side tasting will be as close as the last two, but I am interested to see.

So ... brew day was Sunday. I also had a pork shoulder to smoke, so I was up early to get that on the Weber kettle. 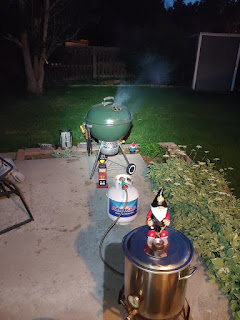 As always for pork butts, I used a charcoal snake on my kettle, and pretty much didn't have to worry about it for several hours.

I got the mash started a little after 5 AM, which is before sunrise here in the Denver area. 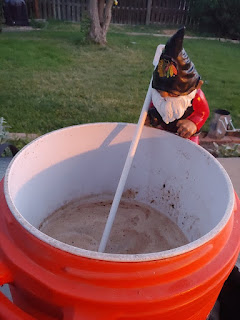 And the pork cooked. From time to time I would check the temperature and/or spray kombucha on it.

Obviously I took a few pictures for the blog and social media. 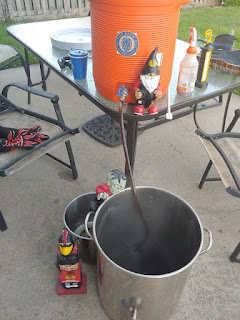 Around 6:30 I ready to sparge and remembered that I had not made a yeast starter. I had gotten the yeast awhile ago and didn't want to go without a starter, so I quick made one.

Probably not ideal to begin the starter the day it will be pitched ... but we adjust when we have to. 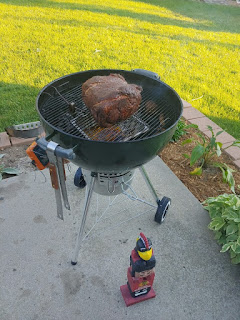 Around 7AM, the boil was started. The kettle was in the 260 to 280 range. My port butt's internal temperature was 84 degrees.

I was low on my pre-boil volume, and high on the gravity, so I diluted a little. 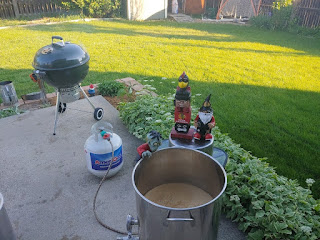 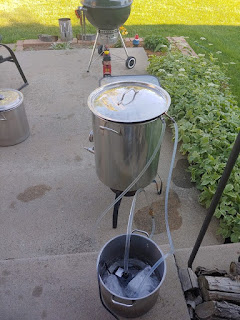 My internal temperature of the pork shoulder was 125 degrees. 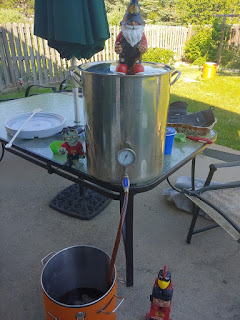 By a little after 9AM, I had the beer in the fermentor, using the Anvil cooling system to get the wort just a little cooler. 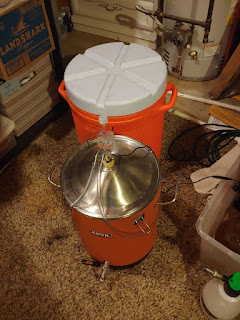 At around 10:15, the pork was at an internal temperature of 170, and I wrapped it up in aluminum foil. 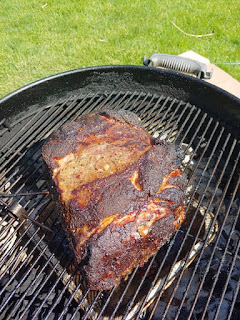 I didn't pitch the yeast into the fermentor until around 11AM when the wort temperature hit 58.

And then, I just waited for the pork to get above 200 degrees.

Around 2PM, I took the pork off the kettle and put it into a cooler to "rest" until dinner time. 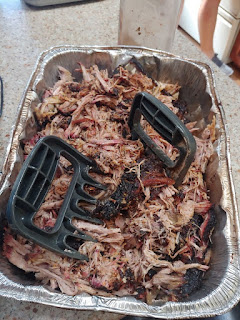 Dinner was fantastic. I've had lunch leftovers a couple days as well, which I love.

Now, the beer is bubbling away at a temperature of 60 degrees. Today or tomorrow I will turn off the temperature control and let it finish at room temp.

I expect I will keg the beer late next week.