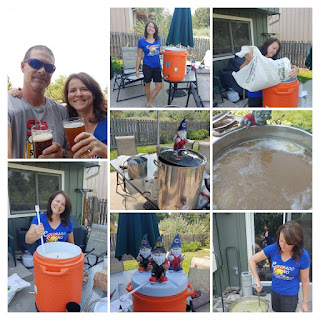 So, you may remember that I procured some Lithuanian Farmhouse Ale Yeast from one of my local breweries.

My first batch using it was Sveikas Lithuanian Farmhouse (262).

I decided to follow up fairly quickly with another batch ... mostly because out of town guests helped reduce my beer inventory.

Because I am likely to kill a few kegs soon, I decided to brew a double batch of beer this past weekend.

To be honest, I reduced the amount of wheat in the batch to help reduce the likelihood of a stuck sparge with a larger than usual mash. I also decided to reduce the boil time to half an hour in the spirit of the Short and Shoddy philosophy. This helped save some time. 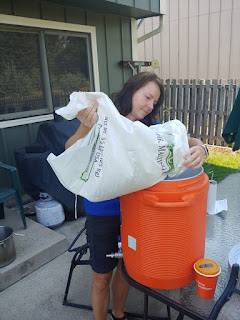 My plans for the weekend shifted slightly causing me to be unable to brew on Sunday, so I ended up switching my brew day to Saturday. Because I didn't have my ingredients yet, had to wait for the Brew Hut to open. This means I got the brew day started later than usual.
My wife (aka The SheppyBrew Beer Model) decided she'd help me out since I wasn't getting started at my usual morning time. 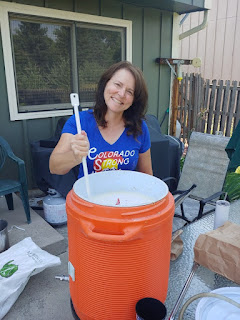 So ... we picked up our grains and hops right when The Brew Hut opened at 10AM Saturday morning. We obviously already had the Lithuanian Farmhouse yeast and for some reason, I had an extra pack of US05 sitting in my beer fridge.
Around 10:45, we got started on our brew day. 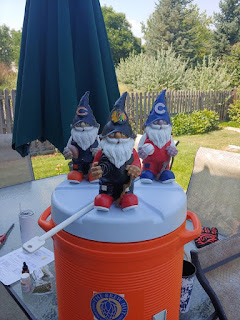 The brewing went fairly smoothly. For some reason, I was real low on pre-boil volume, so I had to add almost 2 gallons of water to the kettle before starting the boil.
The gravity was right on after adding the extra water. I'm not sure if Beer Smith just isn't dialed in to larger batches or if I missed mash and/or sparge water. To be honest, I don't really care. It worked out perfectly ... it just took a little extra water. 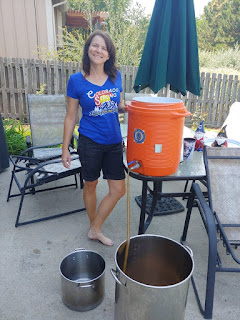 And ... no stuck sparge. Draining the mash tun seemed to take a little longer, but eventually it all came out with exactly the right amount of sugars.
Because of the late start, we were able to enjoy some homebrew while brewing. Usually, I don't partake in beer until after the brew day is over.
The SheppyBrew Beer Model is just a bad influence on me. 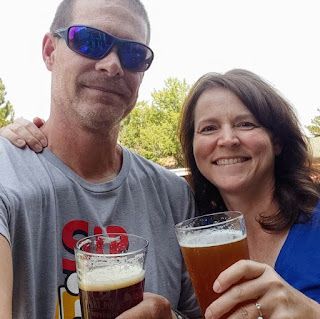 The boil went perfectly. My kettle was filled to capacity, but we used fermcap and didn't get any boil over. 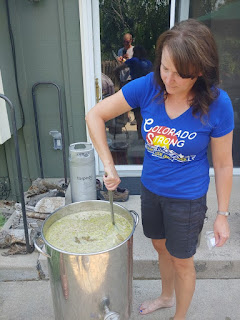 We got the hops etc added at the right times.
We didn't have as much coriander as I thought, so we decided to wait on adding that to fermentation.
We also didn't have any orange zest, so it will be added later as well. 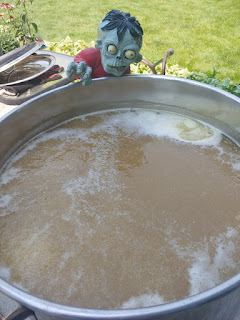 After the boil was done, I chilled to around 85 degrees Fahrenheit. Lifting 10 or 11 gallons of water up onto the table was challenging, but I was able to do it.
I filled the Anvil fermentor with half the wort on the Farmhouse yeast. Then I hooked up the pond pump circulating ice water to get the rest of the beer down to 60ish degrees.
Then, I filled my second fermentor and pitched the US05.
The SheppyBrew Beer Model helped with clean up, and we were done around 2:30 or 3:00. 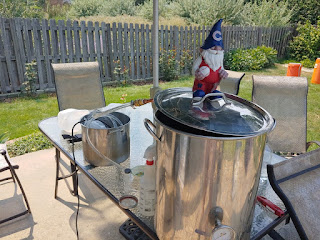 As I type this, the Farmhouse yeast is done. I have an empty keg, so I'll probably keg it up very soon.

The US05 fermentor is still going.

I'm really looking forward to trying both beers side-by-side. I'll be sure to let you know how that goes.

By the way, Sveikas Lithuanian Farmhouse Ale turned out awesome. It is much cleaner than I would expect fermenting at such a high temperature, but it does have a little peppery and citrusy ester to the finish. This should really compliment the coriander in this batch.

I also think it would be fun to try something like Colorado Strong with this yeast. I think the citrus esters from the yeast would work really well with the Cascade and Centennial hops in  Colorado Strong.

Stay tuned on that too. Bookmark Sheppy's Blog: Lithuanian Farmhouse to see what other beers I brew with this yeast.