Brisket in the Cold 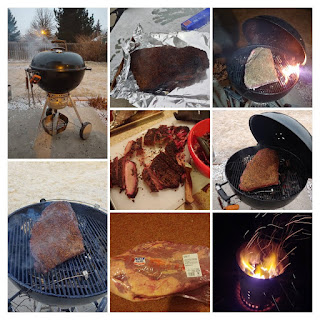 Last week, while in Sam's Club I saw an 11 lb USDA Prime Brisket.
When I see one around 10 lbs, I am always very tempted to pick it up.
I succumbed to the temptation, which of course meant I had to cook it up this past weekend.
It was cold in Denver over the weekend. Much colder than we're used to here on the front range.
The high I saw on Saturday was something like 3 degrees F, and most of the day was colder than that.
I don't know for sure, but I'm fairly sure I've never smoked a big hunk of meat on such a cold day, so I was a little nervous about keeping my smoking temps up.
Even so, I was pretty sure my Kettle would be able to do it, so I gave it a try. 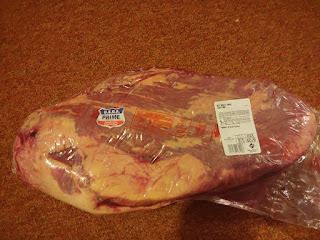 As it turns out ... I didn't really have anything to be concerned about. The severe cold didn't seem to affect the kettle temperature at all.
On Friday, I set up the kettle so that it would be ready to go early on Saturday morning.
I also trimmed and applied rub to the brisket the night before. 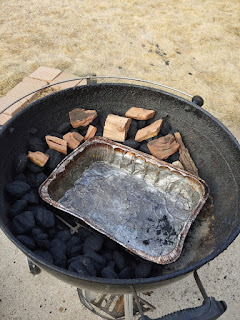 I was up before 5:30 AM on Saturday. Alexa told me that the temperature was 1 degree F when I got up.
I got the chimney lit and the coals on the "smoker" before 5:30. 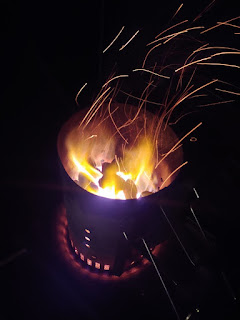 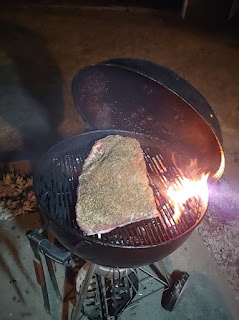 For the next few hours, I just let the kettle do its thing. I tried to keep the kettle right at about 270. For the most part, it stayed right around there.
It got down to 261 and up to around 295, but really stayed close to that 270 degree mark for the most part. 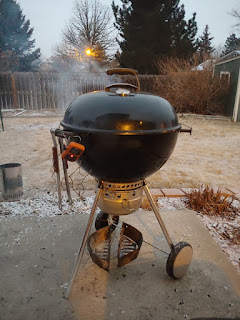 The hickory and mesquite smoke smelled wonderful. I sprayed the brisket with kombucha 2 or 3 times every 45 to 60 minutes. 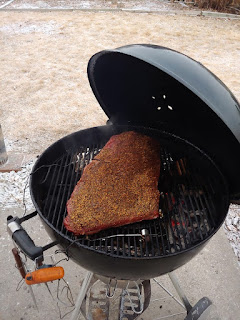 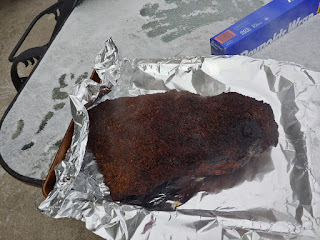 I probed a couple times and decided to let it cook more.
I pulled it off the smoker at 13:40. 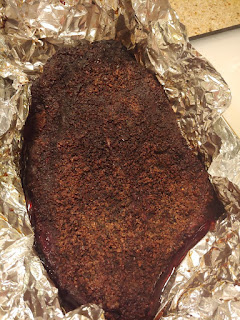 I left it wrapped in a cooler until a little before 6PM and then I sliced the flat and shredded the point.
I had a sandwich. 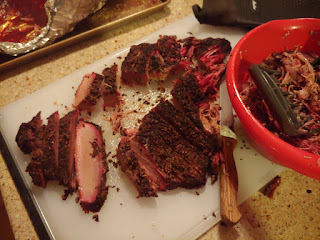 It was yummy.
I do wish it would not have rested for such a long time, but that's just how brisket cooking works for me. I'd rather finish early than have it still cooking when our planned dinner time is.
It turned out great. This wasn't my best brisket. It wasn't my worst. It was guuud.
Now we have left-overs. I'm hoping my wife will make beef stroganoff with it this week.
I also froze some to use for (probably) chili coming up next weekend.
Great eats.
As always, you can keep an eye on the regular SheppyBrew Channels to see what is happening with beer and other things: SheppyBrew's Facebook Page; Sheppy's Twitter Feed;SheppyBrew's Instagram Page; and SheppyBrew's Website. Of course, don't forget to visit this blog often as well!
Go Blackhawks!
Posted by ESheppy at 2/16/2021 06:13:00 AM