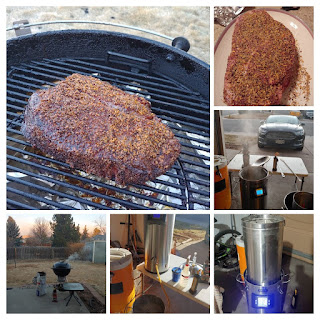 Recently, I turned 40 years of age. Recent is a  relative term.
Even more recently, I turned 50. Time flies when you are having fun.
To be honest, I'm now significantly over 50. I think with all the biking I've been doing over the past few years, I might be in better shape than I was at 40.
At least I'm in better cycling shape.
Anyway, when I turned 40, I thought it might be a good idea to have a quarter life crisis, since I was obviously too young to have a mid-life crisis.
I never did get around to having that quarter life crisis, but I did brew
Quarter Life Crisis Hoppy Red Ale 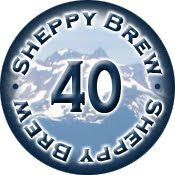 I think at this point, I'd have to admit that I am (slightly) over a quarter of the way through my life. It's probably too late to have a quarter life crisis.
However, I'm still too young to have a mid-life crisis, so I decided to brew Quarter Life Crisis Hoppy Red Ale again.
I brewed it Super Bowl Sunday. 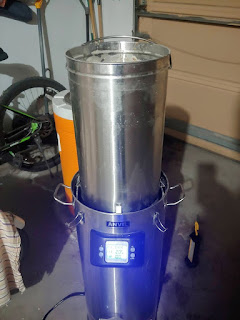 I had actually been thinking about the Anvil experiment I had done with Arctic Vortex (Batch 277). I started the mash just after midnight and let it go all night until the morning. That day, even with the mash being completed before I got up, I still ended up with a 4 hour brew day.
It didn't really save me much time.
I wanted to see if I could cut that brew day time down. So, I repeated the experiment.
This time, rather than trying to re-heat the mash in the morning using my re-circulating pump, I immediately lifted the grain pipe to drain the wort as soon as I woke up. 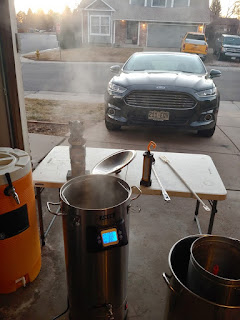 My boil timer started a little more than an hour after I woke up. This 120 volt electric system is slow.
My pre-boil volume and gravity were right on plan.
I got the right hops added at the right times.
I even got a Chuck Roast started on my Weber Kettle. 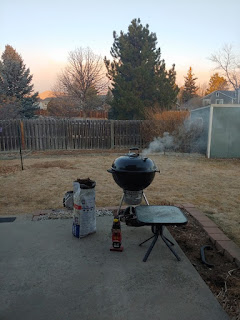 After the boil was done, my Hydra wort chiller got my wort down to below 60 degrees in less than 15 minutes.
My gravity reading going into the fermentor was exactly at the planned 1.065. 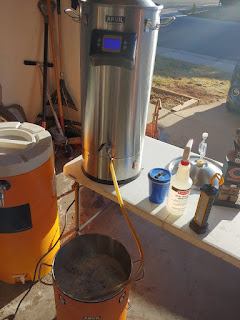 I got the yeast pitched, and the brew day cleaned up just before the 3 hour mark of my brew day. So, I cut an hour off my time for my previous over-night mash.
FYI ... I do realize that technically my "brew day" was more like 9 hours if you count the mash time, but I was sleeping during that time, so I am not counting it as part of the brew day. 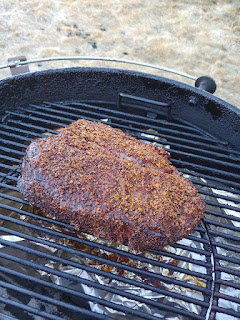 Meanwhile, my chuck roast had taken on about as much smoke as it was going to, so I brought it in and let it finish in my crock pot.
So, I was able to get in a bike ride on Super Bowl Sunday.
The yeast was going crazy by the next morning.
Fermentation was basically done by Thursday. At this point, I'm letting it rest until a keg becomes available.
I think I'm going to be drinking this Hoppy Red Ale (or Red IPA ... whatever you prefer to call it) by early March.
YUM!
As always, stay tuned on the regular SheppyBrew Channels to see what is happening with beer and other things: SheppyBrew's Facebook Page; Sheppy's Twitter Feed; SheppyBrew's Instagram Page; and SheppyBrew's Website.