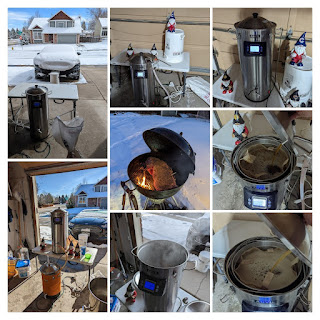 I brewed a Vienna lager yesterday.
It is only my third batch of beer this year, but it was my 306th of my brewing "career".
As I've mentioned a few times on this blog, I've been using Root Shoot malts quite a bit lately.
One of my favorite homebrew shops has been featuring their malts, and I have really like the character that I get from the ones I've used so far.
Much like the Colorado Strong IPA (Batch 305), I designed the recipe with all Colorado malts. As I mentioned I really like the Vienna malt from Root Shoot, and this beer used it as its base.
I called the recipe:
Colorado Vienna Lager 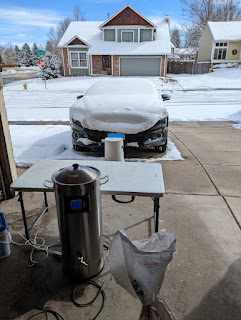 As I do most of the time, I prepared my water the day before and set the Foundry's timer to start heating the strike water overnight so the I could start brewing right away when I woke up on Sunday. 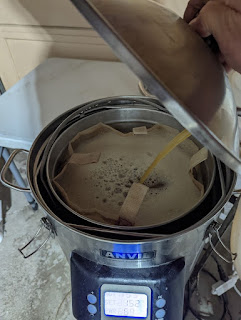 There was snow on my patio, and so I brewed in the garage. 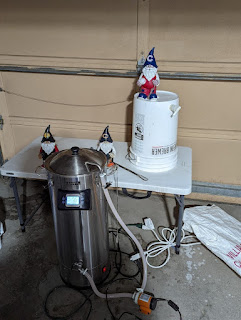 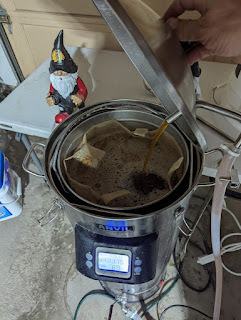 Everything went pretty well. My pre-boil gravity was a touch low, but I boiled 15 minutes to get it up to the expected gravity. 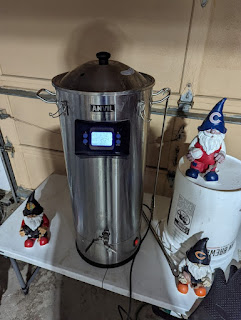 The boil went as expected. 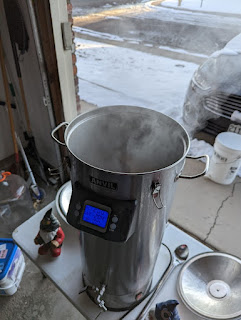 I did come up a little low on my OG. Lately, this has been happening to me more than not.
I'm not sure if I need to reduce my boil-off rate or maybe just reduce my expected brew-house efficiency.
It isn't a huge deal. Once I start drinking the beers, I don't really care that it is lower in alcohol than designed, but I would like to get this Anvil system dialed in a little better. 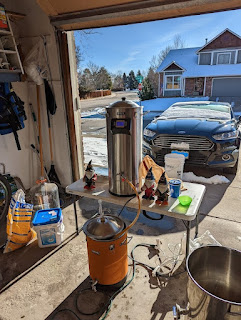 Regardless, I had the yeast pitched before 9AM and clean up was done a little bit later.
Note, I also smoked a brisket, but I'll tell you about that in my next blog post.
In the meantime ... don't forget to stay tuned on the regular SheppyBrew Channels to see what is happening with beer and other things: SheppyBrew's Facebook Page; Sheppy's Twitter Feed; SheppyBrew's Instagram Page; and SheppyBrew's Website.Of course, don't forget to visit this blog often as well!
Posted by ESheppy at 2/14/2022 06:14:00 AM