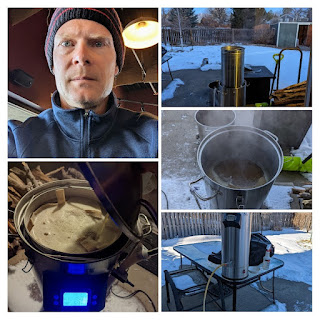 So far this year, I'm brewing less than last year.
It is early, so it doesn't really mean anything yet, but I expect I'll be back to closer to pre-covid levels of brewing this year.
We'll see.
This past weekend, I did brew my 2nd batch of the year. It was my 305th batch in my brewing "career". If I'm counting correctly, it is the 31st time I've brewed on the Anvil Foundry all-in-one system.
The recipe I brewed was my take on the "Colorado Strong IPA".
In 2020, I was able to give a donation to the Colorado Strong Fund.to get the official recipe for the Colorado Strong Pale Ale.
The 2021 Version of Colorado Strong doesn't appear to be hyped as much, and as far as I can tell, there isn't really an official recipe.
That's fine. I just created my own ...
Colorado Strong IPA 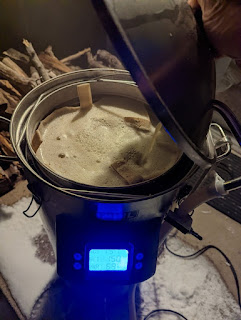 One of my local home brew shops has really started supporting a local Colorado maltster Root Shoot Malting, and so I was able to design the recipe using some of it's malts.
As I mentioned in Decemberfest Lager post, I really like the Vienna Malt that Root Shoot makes, so a significant amount of the grain bill used that malt. 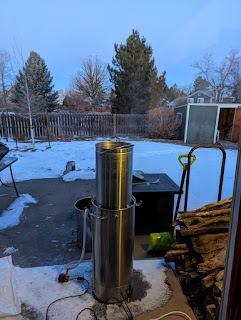 Saturday, I purchased the grains from my homebrew shop. I also prepared the water and set a timer to bring it up to strike temperature overnight.
Sunday, I was up at 5AM, and started brewing. 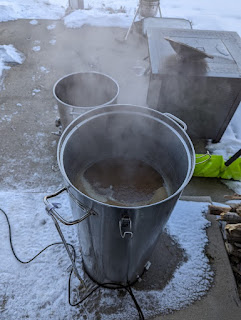 The mash was pretty full, but I got it all in there and the circulation pump going.
I let the mash go a little longer than the recipe says, and according to my pre-boil gravity reading I was right on plan.
The boil went fine. My OG was low, so I added in some table sugar at the end to get closer to the planned OG.
For some reason, sometimes either I'm reading high on pre-boil or low on post-boil refractometer readings, because I am ending up low going into the fermentator after seeing the pre-boil reading right on track.
Oh well. 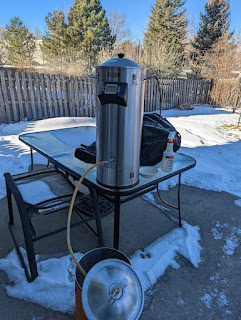 Because it was cold, the chilling went quickly and I easily got down below 60 degrees.
I pitched low and let the temperature of the fermentation rise as at room temperature in my basement.
I was cleaned up a little after 10AM, and was able to get a bike ride in.
Fermentation was bubbling early the next morning. I'm using my cooling system on the fermentor, in the low 60's, but I'll probably turn that off after a couple of days. 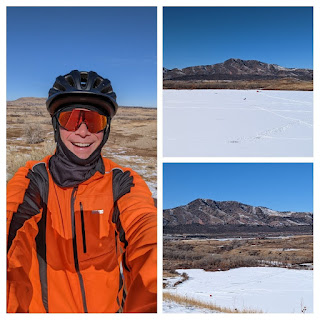 I'm looking forward to drinking this beer. It seems like it has been quite awhile since I've brewed an IPA.
I'll let you know how it turns out.
As always stay tuned on the regular SheppyBrew Channels to see what is happening with beer and other things: SheppyBrew's Facebook Page; Sheppy's Twitter Feed; SheppyBrew's Instagram Page; and SheppyBrew's Website.Of course, don't forget to visit this blog often as well!
Posted by ESheppy at 1/25/2022 06:27:00 AM