As I shared just a few days ago, I have moved on to Zymurgy's 2012 Best Beers in America list from the 2011 version of the list.

There were only 7 beers on the list that I have not tried, and amazingly enough, all except one are theoretically available here in Colorado.

I am pretty sure that Firestone Walker has been distributing to Colorado for less than a year, so it is nice for me that they appeared on the list this year (as opposed to last year or the year before when I would have had more trouble getting some).

The Brewing Network guys really seem to rave about Firestone Walker. The first time I ever heard about this brewery was on the BN's "Can You Brew It" show where Jamil and the gang have cloned quite a few of the Firestone Walker recipes. This does include a show where they did Union Jack. I don't generally clone beers, but I love listening to those shows and this brewery's series on the show were pretty informative is you are into that sort of thing (which I am of course). 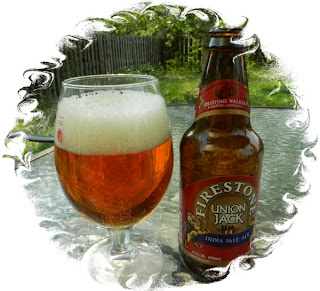 The Firestone Walker Union Jack web page calls the beer a well-blanced, west coast IPA. They tell us that it is double dry hopped and that it uses over four pounds of pacific-northwest hops per barrel. I did not see its IBU, but it is 7.5% ABV and uses 2-row barley as a base malt. It also contains Munich malt, Carapils and Simpson's light crystal. For hops, it has warrior and simcoe for bittering;  cascade and centennial as a late kettle addition. It also dry hops with amarillo, cascade, centennial, chinook, and simcoe.

So, last weekend after cleaning up from my Summer Lovin' brew day, I sat down in the shade and poured myself one of the Union Jack bottles.

It is a visually pleasing beer. It is a crystal clear golden amber color with a significant off-white head. It is nicely carbonated and the bubbles seemed to keep going and going. There was great head retention and wonderful lacing on the glass as the beer started disappearing down my gullet.

Typical of a West Coast IPA, its aroma is full of American hop grapefruit citrus. I didn't get much of the malt in the aroma. Obviously this is not a surprise.

Again, I don't know what the IBUs on this beer are. It did not taste overly bitter to me. I agree with the "well-balanced" description from the website. The malt flavor comes through with a bit of the rich Munich malt flavor, but for the most part is light enough in body to be perfect for an IPA.

And, of course, it was hoppy. Citrus, dominated with grapefruit, but I got a bit of orange and maybe a bit of mango.

Wonderful beer. It was truly a wonderful beer drinking experience on a hot Colorado summer day.

So, now on the 2012 Best Beers in America list, I have had all but 6. As I mentioned, I have #16-Firestone Walker Double Jack in my fridge and will probably be blogging about it relatively soon.

After that, I will still need to find:

12. Sierra Nevada Ruthless Rye (out of season, I think I need to start looking for that next spring)
15. Dogfish Head 60 Minute IPA (I should be able to find this in Colorado somewhere)
34. Troegs Nugget Nectar (not sure where I will get this ... hopefully they bring it to GABF)
T37. Russian River Blind Pig IPA (RR distributes to Colorado, but I they are very popular and still hard to find)
T48. Russian River Pliny the Younger (has an almost cult-following so if I find it somewhere, I have to grab it immediately)