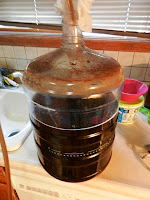 It finished with a 1.011 specific gravity, which makes it a 3.7% ABV beer. I am pretty sure this is the lowest alcohol beer that I have ever brewed. It is certainly the only time I have intended to brew something this low in alcohol.

It is also the least expensive beer I've ever created. Well, technically some of my Mr. Beer batches with the free ingredients cost me less to make, but this is much cheaper than what I should have paid for those.

I've been thinking about making this beer for some time, and I am looking forward to having it on tap.

As you can tell from the pictures, it is a nice brown color. The sample was light in body, but the little bit of roast from the  chocolate wheat did make it seem a bit more substantial. It has a firm, but not overpowering bitterness. It is a nicely balanced flavorful session beer, which will be nice to drink as the heat of the summer hits us here in the Denver Metro Area.

I am chilling and carbonating it right now and will probably be drinking it by next weekend. 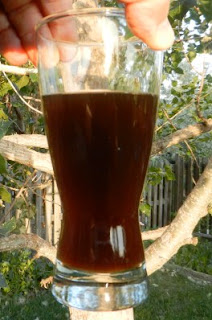 I got a message from "Gretchen", the gluten-sensitive friend whom has been discussed quite a bit in my Gluten Free posts on this blog. Apparently, she is out of Free the Glutens! APA, and had to buy some gluten free beer at the liquor store. She asked if I would make another "batch of that Gluten-Eater". Her message said she would be willing to pay "fair price".

So, I will be brewing another batch of something with White Labs' "Clarity-Ferm" (see Killing the Glutens). I have not decided if it will be another batch of Laser Salt Sandy Blonde Ale or something new. The message I sent back to "Gretchen" asked if she has a favorite style of beer. I will see what she says about it, and then see what I can fit into my brewing schedule.
Posted by ESheppy at 6/23/2012 08:40:00 AM