Back in the fall, I bribed my coworkers with beer. I told them that whoever donated to the 2nd Wind Fund of Metro Denver would receive some Stouticus and some of another yet-to-be-conceived beer (which ended up being HopToberfest). I got a fair number of people who responded by donating, which was awesome.

As I was distributing to the kind-hearted generous souls who were nice enough to help me out, I got a few comments like "Oh! I meant to donate, but just forgot" or (from one guy whose wife also works there) "Didn't we donate? Oh [my wife] was supposed to. Are you sure?"

One honest person told me that he would have liked to have donated, but was a lazy bastard, and just didn't do it.

He jokingly told me that I should brew a really crappy cheap beer for those who were too cheap to make a donation (or those who communicated best intentions but never followed through). He (knowing my obsession with Arrogant Bastard, I think) thought the name "Cheap Bastard" would be an appropriate name for it. I loved the name and filed it away in my memory banks for future use. I almost branded "Red Failure" as "Cheap Bastard" when I brought in some of that to share with my co-workers, but I decided I wanted to save the name for something else.

For some time, I've been thinking of brewing a low - alcohol (under 4% ABV) home-brew (remember the discussion I had with myself about how SheppyBrew didn't have a lot of session beers?). With this in mind, I decided to make a low ABV beer called "Cheap Bastard".

For the recipe, I sort of had in mind an English Mild sort of beer. With "cheap" right in the name, I decided that it would be mostly American 2-Row malted barley (which is the least expensive malt at my LHBS), and that it would not have a lot of hops. You can find the ultra-simple recipe I came up with at "Cheap Bastard American Mild Ale". 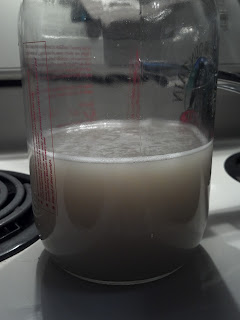 I started the brew day pretty early. I had intended to make a yeast starter the day before but never got around to it. I had to make the starter first thing so it would have some time to replicate some more yeast cells. 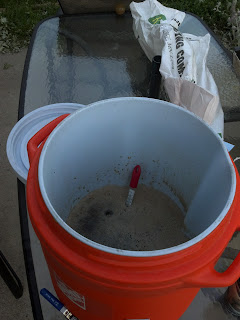 Then, since I had time, I decided to get started with the mash before leaving for church. I had some issues stabilizing the mash temperature, but eventually got it to right around 155 or so. I let the mash sit for a couple hours while I took the family to church. 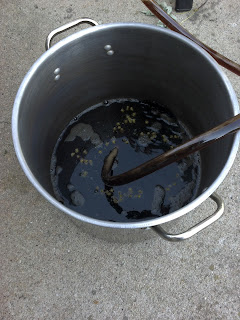 After getting home, I decided to do a first-wort-hop rather than just a 60 minute addition that was specified in the recipe. I don't know how much difference this will make in the final beer, but man does it smell good. 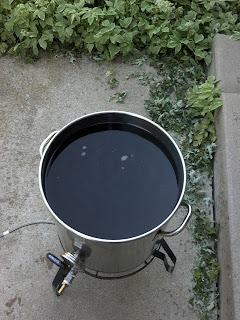 I got really good mash efficiency, and ended up with about 8 gallons pre-boil wort at 1.032 gravity. The recipe plan was 7.5 gallons at 1.029. Thank goodness for Fermcap-S because 8 gallons of wort in an 8 gallon pot is just asking for a boil-over.

But, the boil went extremely smooth. With such a simple recipe, there were no more additions to the boil. I totally forgot to add Irish moss and actually decided not to bother with yeast nutrient due to the low expected ABV, so I actually didn't make any additions at all to the boil.

While brewing, I mowed the lawn and dug up part of our garden and did some other miscellaneous yard work. It was a very productive day. I think the Cheap Bastard will be a great session beer for the hot summer months. 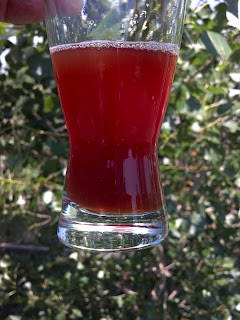 I also took a sample of the Raspberry Wetta Berry ale that I brewed a couple weeks ago (see Wetta Berry Mr. Beer Batch and Raspberry Wetta Berry). The gravity is right at 1.010. Since I didn't take an OG reading, I don't know what kind of attenuation or ABV this is, but 1.010 is exactly what I expected based on what the Mr. Beer ingredients that I used.

As you can see from the picture above, the beer is a red color. Since the beer itself should be pale blonde or maybe gold, all that red comes from raspberry puree. I think maybe what I have here is more of a fermented raspberry puree malt beverage than a beer. It takes a bunch like raspberry. It is really too bad I cannot take a keg on the plane, because this would be ready to drink about the time we are doing a family reunion with the namesake of Wetta Blonde. Bummer.