I have an irrational fear of gnomes.

It creeps me out the way these little creatures sneak around causing mischief. The way they pretend to act like real people is unnatural. Their little voices send chills down my spine. Oddly enough, leprechauns and tommyknockers don't bother me. I can't completely put my finger on what it is, but something about gnomes are completely frightening. Quite often when I see several gnomes together, I scream like a little girl.

I can't help it, they freak me out. My wife has a similar issue with spiders.

The thing that freaks me out the most about gnomes is the unnecessary silent g. I want to pronounce it "Ga-nome", and I can see them smirk when I do that. Even when I don't actually see a gnome, the silent g makes my mind flash to those little smirks. Oddly enough, the g's at the beginning of gnats and gnus don't affect me nearly as strongly as the gnome g (probably because gnats and gnus don't flash me that evil smirk when I try to pronounce the hard g sound). 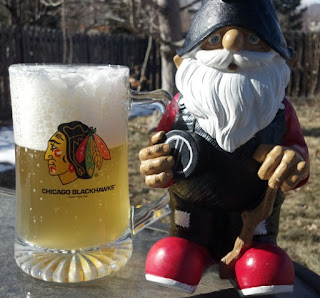 For Christmas, in an attempt to help me get over my unreasonable fear of gnomes, my loving family gave me a gnome as a gift. The gnome that they got me was a Chicago Blackhawks' fan. They figured that since we obviously I have one thing in common with the little guy, I would connect on a personal level and hopefully get past my fear of gnomes.

His name just happens to be Gnasty.

While I don't completely trust him, and fully expect that some night he will try to kill me in my sleep, the little guy is growing on me. Not only is he a fan of my favorite hockey team, but he is also a craft-beer fan. He seems to enjoy the same sort of beers that I do.

He has even been helping me brew. In fact, you probably noticed him in the pictures in my blog post "Brewing Snowball's Chance". He doesn't have a whole lot of experience and certainly is not as pleasant to look at as The Beer Model, but he is learning fast and he does help out a ton.

We have even talked about Gnasty helping me design a beer sometime in the near future. Stay tuned for that! 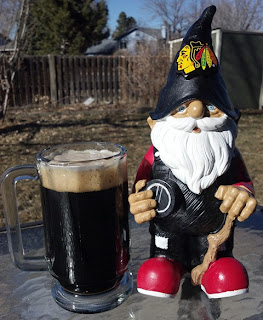 If you follow me on untappd, and have paid attention, you have seen him with pictures of my check-ins. He does like the same beers that I do, so it is fun to geek out on beer with him. So far, his favorite beer is Blackhawk Black Ale (and why wouldn't it be?), but he has enjoyed just about everything I have shared with him. 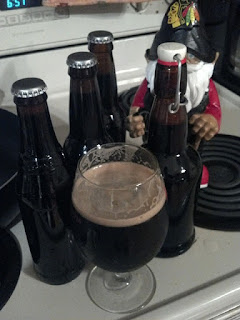 Gnomes (in general) still terrify me. Despite my absolute certainty that Gnasty will attempt (and likely succeed) in murdering or at least severely injuring me in the early morning hours of some day, we are becoming friends. At some point, I may even overcome my paralyzing terror of gnomes (which is the perfect time for them to attack, isn't it?) When I do overcome my fear, I will have my loving wife and boys to thank. And, Gnasty will also be able to take a ton of credit.

Wow, I feel better just admitting my affliction and knowing that Gnasty is here to help. 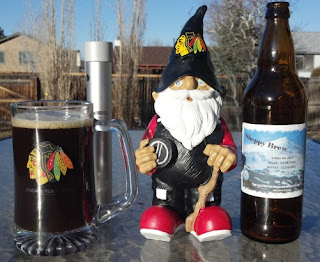 Email ThisBlogThis!Share to TwitterShare to FacebookShare to Pinterest
Labels: #GnomesLikeBeer, Gnasty, Me, SheppyBrew