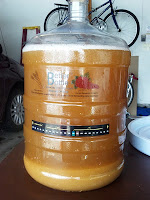 Yes, 2012 is over. SheppyBrew Brewery was busy this year.

For quite awhile I was thinking my 4th quarter was just crazy, but as I told you in Correction: 2012 Q3 SheppyBrew Stats, I accidentally ended the 3rd quarter early on my brew stats spreadsheet. So, I was thinking that Q3 was low and Q4 was high. Since then, I have fixed my spreadsheet.

I told you in SheppyBrew Styles that so far, I have brewed all-grain batches in 12 of the 22 BJCP categories. My 2013 goal is to brew recipes in the remaining 11 categories (Light Lager, Dark Lager , Bock, Amber Hybrid Beer, English Pale Ale, English Brown Ale, Porter , German Wheat and Rye Beer, Belgian Strong Ale, Strong Ale, Smoke-Flavored and Wood-Aged Beer  ). As I mentioned in the comments, I expect to take care of some of the first 3 above with back-to-back-to-back batches of Munich Helles, Schwarzbier, and Maibock. I'll use WY2124 Bohemian Lager™ for all three, harvesting each going from smaller to bigger beers. I would like to have the Maibock in May, which means I better get going on those.

The very first batch of these styles is 7C Düsseldorf Altbier, which I actually brewed yesterday (stay tuned for the brew-day blog post on this).

I am not sure what else to tell you, so I am going to end this edition of the SheppyBrew Stats report.

Let me know in the comments below what you've been up to in 2012 or what brewing you have planned for 2013.