According to the spreadsheet on which I track this sort of thing, Sunday, I brewed my 21st batch of beer for the year. More significantly, BlackHawk Black brought my 2012 total to exactly 100 gallons of beer.

You may remember that last year I mentioned that I might hit 100 Gallons. Later, at the end of the year, I reported that I had come short and only reached 98 gallons for 2011.

This year, though, I hit the 100 gallons. I am planning on brewing at least one more batch, so my 2012 total will actually break the 100 gallon mark.

As I mentioned last year (see 100 Gallons of Beer), it is legal in the United States (thank you Jimmy Carter) for an individual to brew 100 gallons of beer per year. A household is allowed to brew 200 gallons. Luckily, I am married to the SheppyBrew Beer Model who is also technically a household brewer. Shrek also sometimes help me brew so the fact that the SheppyBrew Home Brewery is breaking the 100 gallons mark will not get me arrested. 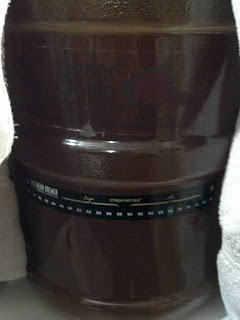 As proof that I am not the only household brewer, see Brewing Boo Berry Wheat, Weekend Sans Kids, Brewing the Laser Salt, Laser Salt and The Beer Model. I am sure there are other blog posts in which I establish a plausible case for it being legal for me to brew more than 100 gallons, so if you are some sort of home-brew cop don't think of coming after me. I'm legal.

While looking at my spreadsheet, I realized that BlackHawk Black was my 106th batch of beer ever. This means that I went through batch 100 without noticing. It probably would have made sense to honor that batch with a mention. I guess I'll do that now. My 100th batch of beer was Laser Salt Sandy Blonde Ale and I blogged about that brew day with Brewing Laser Salt Again. Had I thought of it, I probably would have come up with a special 100th Batch recipe. Oh Well, maybe I can do that for some other significant batch of beer. 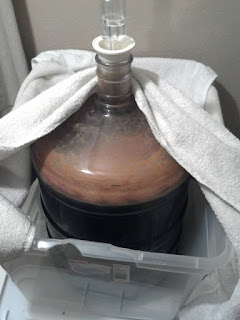 Here is a list of the batches that I have brewed so far this year:
There are not very many repeats on that list, and most of these beers are new recipes this year. That is quite a variety.

As I mentioned above, some of you will look and say to yourselves, "100 gallons in a year is not very much". Is so, here is your chance to brag. I am also curious to hear from those of you who have not reached the 100 gallon mark. Let me know by leaving a comment .... how much beer have you brewed this year?