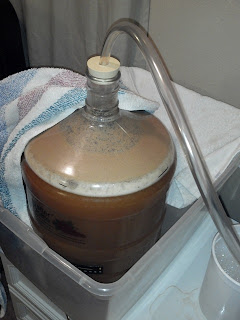 So, as you can see, I am continuing to trend away from extracts and towards all-grain brewing.  So far, I am really liking the 10 gallon gott cooler with a false bottom for my mash / lauter tun (see Back to the mash tun).

Obviously, I did not get to 100 gallons for the year (see 100 Gallons of Beer). I easily could have brewed up a quick Mr. Beer batch, but decided 98 gallons was close enough. I suspect that in 2012 I won't brew anywhere close to 100 gallons. 100 gallons is actually quite a bit of beer to have to deal with.

Along with my latest batch of Stouticus (see Thankyou Stouticus), I distributed quite a bit of my Hoptoberfest Vienna Lager (see Bottling Hoptoberfest) to people who donated to the 2nd Wind Fund. Hoptoberfest turned out fantastic. It might be a little darker than you would probably consider a Vienna Lager to be, but I like the flavor so much I'm not changing the recipe to lighten up the color.

I brewed my first Gluten Free beer this quarter "Free the Glutens! APA". It got some good comments from the few people who tried it, but there is something about the flavor I don't like. You can read more about this following my Gluten Free blog-label. One of the things I mentioned was that my guy at my LHBS told me about White Labs' "Clarity-Ferm" as a way to get rid of gluten protein in beer. I think my next attempt at a gluten-free beer will use Clarity Ferm instead of trying to stick with gluten-free ingredients. 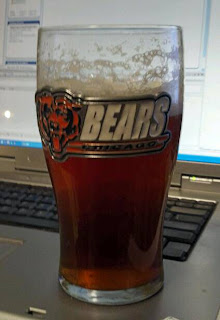 Last year, I mentioned that I would probably brew less in 2011 than 2010. Obviously, I did brew less batches but more total volume.

I said I would probably concentrate more on my favorites and have less of a variety of beers than I did in 2010. I think it is safe to say that was the case. Next year, I think maybe I'll try more new things.

I also mentioned that I would try to give away more beer. I did by a lot. I hope to keep that trend going in 2012 as well.

I said most of my beers would be all-grain, but I would continue to make all the different types (HME, extract with steeping grains, partial mash, and all-grain). This prediction was true and will continue in 2012 I think.

I also thought I might get a "real" 5 gallon fermenter to do bigger batches. Obviously, I did (actually a 6 gallon one).

I mentioned, "I would love to get into kegging my beers, but I do not know if that will happen." It did happen, and if anything, I am kicking myself for not doing it sooner. I will keg more beer in 2012. Having my Beer Gun is really great because I can keg up the batch quickly and then bottle as I want from the keg.


Sometime in 2012 (probably early on), I'm going to try to brew a sour beer of some sort. At the moment, I think I'm going to try to do a recipe close to Jamil's Flander's Red in Brewing Classic Styles. Instead of using bugs in fermentation, I think I'm going to first try a sour mash. I'm also thinking of doing a secondary fermentation on tart cherries to add a bit more of that flavor. If this approach doesn't work how I want, I guess I'll move to some sort of yeast / bacteria blend in fermentation to do the souring. But I'm a bit leery of just jumping in all the way into fermenting with bacteria, so I'll try the sour mash first. I guess I'm just a wimp that way.


So, that is all I can think of as a brewing 2011 review and look ahead to 2012. As always, I'll continue to let you know how it is going through the year. Happy Brew Year everyone!

EDIT (1-4-2011): I just noticed that my virtual brewing buddy, Scott (sometimes referred to as "CrazyBrody") started publishing his brew stats. Check it out on his blog post "2011 Brewing Stats". I think this might be the first time anyone has ever accused me of being "organized".
Posted by ESheppy at 1/02/2012 08:54:00 AM