So far in 2011:
Note, 3 of my batches are still in the fermenter.  This is consistent to all the previous posts.  I always assign the quarter / year by date brewed.  But, that does mean my last bullet about cost per bottle is incomplete until the rest of these are bottled.

You may be wondering how my gallons can be so high compared to last year when my number of batches so far this year is tracking to be down a bit.  Part of the answer is that I've made 3 double Mr. Beer-sized batches.  I also purchased a 6 gallon carboy in which I've brewed two beers (Stouticus American Stout and Fat and Stoopid Amber Ale).  So, my batch sizes are mostly twice as big as they all were last year.

Actually, Rocktoberfest Lager is the only one that was truly a Mr. Beer-sized batch this year.  I am considering a double batch of Buckwheat's BPA as two batches because half the batch is fermenting with Fermentis US05 and the other half is fermenting with S33, so they are actually two separate beers.  You may recall that I did a similar experiment last year comparing S33 with T58.  These two batches are still in their fermenters.  I should be bottling them up soon and will probably let you know how they seem to compare.

So far, I do like doing the bigger batches, especially in the new carboy.  The only part I don't like is the longer bottling days with the big batches.  I have decided to start kegging some of my beers.  I've even taken the step of purchasing a Kegerator from ebay, and my batch of Fat and Stoopid Amber Ale may be the first of my beers that I put in a 5 gallon keg. 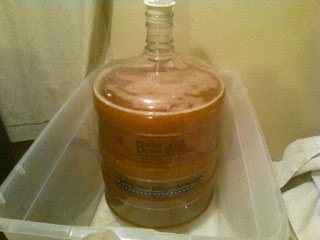 As I discussed in "BIAB for me?", Fat and Stoopid Amber Ale started out to be another batch of my world famous Phat and Tyred Ale, but I ran into issues.  Partially because of those issues and partially because my mash tun is simply too small to effectively make "big" batches of all my favorite recipes, I am thinking of moving to BIAB batches.  In fact, I am planning on making my next batch BIAB.  It will probably be a Gringo Cerveza Jalapeño Cream Ale for Cinco de Mayo.  I think this will be another batch that I split into 2 Mr. Beer fermenters.  I plan to add jalapeños in one fermenter and leave the other as just a regular old lawn-mower type beer.

In SheppyBrew 2010 Stats, in the "expectations" section I said:


"I think I'll brew about the same amount or maybe even less.  I'm thinking that I'll concentrate more on my favorites and thus have a bit less variety as well."

At the moment, it doesn't look like I'm brewing less, but I have been concentrating on brewing my favorites.  As I mentioned, only two of my batches were new recipes, and Fat and Stoopid was intended to be Phat and Tyred.  I do think I'll slow down eventually.  I can't drink too much more beer, and I am about maxed out on storage space.


"I may or may not let more people try my beers."

In fact, just this past Friday, I brought in 40 bottles of Stouticus to share with my co-workers, so assuming most of them actually take some, I think that will already be more people than have had SheppyBrew beers so far.


"I probably will do real 5 gallon batches.  Even if I don't get a 5-gallon fermenter, there will probably be more big batches split into two Mr. Beer fermenters."

Well obviously, I did buy a 6 gallon carboy and have split big batches into 2 Mr. Beer fermenters as well.


I would love to get into kegging my beers, but I do not know if that will happen.

Well, it does look like that will actually start happening pretty soon.

So, what's next for SheppyBrew nano-brewery?  Well, I already told you, but just as a reminder: I'll keg some of my beers and I will experiment with (and maybe switch to) BIAB all-grain brewing.

So, there is your SheppyBrew update.  I know no one but me really cares about this stuff.  That's ok, because no one else really reads the blog.  If you want to read something more interesting, try here or here.