So, this blog post might get a little home-brewing-geek-technical for some of you.  If you're not up to it, turn away now.  If it is more your speed, you can look through posts with pictures of the assistant brewers instead. 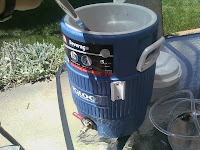 For all-grain batches, the SheppyBrew nano-brewery uses a 5 gallon gott-type cooler as a mash and lauter tun.  It is modified slightly to include a ball-value and a stainless steal braid to strain the grain as its "manifold".  I basically got the design here: Homemade Mash Tun Design.  I picked the 5 gallon cooler because when I started doing all-grain batches, I was still doing "Mr. Beer" sized batches, and 10 gallons just seemed like overkill.  Lately, however, I've been doing either double Mr. Beer sized batches or 5.5 to 6 gallon batches for my better-bottle carboy, and at my typical OG (usually around 1.060), the 5 gallon mash tun works ok.  At 1.25 quarts of water per pound of grain (which is BeerSmith's default on the mash profiles I use), I can fit the grain and water.

I've been hearing and reading that thinner (more water per pound of grain) mashes are better for mash efficiency.  Plus, there are some recipes that have higher OG's, which obviously means more grain.  And those will not fit in the 5-gallon cooler.  My recipe for Phat and Tyred Ale (which is what I had planned on making last time I had a brew day) calls for 10.83 lbs of grain with 13.53 quarts of water for the mash, and the tun was full.  If I were to try to make a 5 gallon batch of beer for Stone Soup IDA, though, I would have 13 lbs of grain, and to make things fit, BeerSmith tells me that I would use 12.91 quarts of water (because that is all that would fit with that amount of grain).  As you can probably tell without even being much of a math genius, that is less than 1 quart of water per pound of grain.  So, my mash in this case would be going thicker, not thinner.

Plus, with less room in the tun, I need to do several sparges (I batch sparge) to get what I need to out of the sparge. AND PLUS ... lately I've been getting some stuck sparges with the large batch sizes.  Until last brew day, these have been no big deal, but the last one sort of sucked.  Well, it was fun, but it could have sucked.  I actually don't know if the large batch sizes are related to the stuck sparges.  I might just need a new stainless steel braid.

Anyhoo... I wrote all that as a long (possibly somewhat boring) way of saying:  I need a larger mash tun.  Gosh, I hope you're not too bored.  If so, check out this blog.  She usually has something interesting to say.

So I need a bigger mash tun.  I need to buy a bigger cooler and I need to do some work and convert this big cooler into something that will strain and drain wort from my grains. 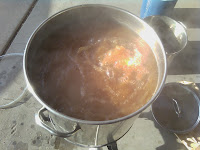 I have read and heard quite a bit lately about Brew-In-A-Bag (BIAB).  The Brewing Network has talked about the subject.  Basic Brewing radio has done at least one podcast about BIAB.  BYO magazine has done at least one article.  BeerSmith's blog has an article  and a recent podcast on BIAB.  And quite a few of my fellow brewers that I know from online forums and/or facebook have recently started BIAB brewing.  In fact, when I was doing partial mashes, I did a sort of weird hybrid between a BIAB method and a traditional mash tun method.

If you don't know, the premise behind BIAB is that you mash in the same container as you do your boil in.  In the pure form, your mash volume is the same as your starting boil volume, although I have heard of modified versions where some sort of sparging is done as well (similar to what I did when I did my partial mashes).  The bag enters the picture in that you put your grains in a big mesh bag.  The big mesh bag goes in the brew pot.  When the mash is done, you remove the bag, and with the bag, the grains come out.  Pretty simple.  All you need is a big brew pot and a big mesh bag, and I happen to own a big brew pot.  I can buy a big mesh bag for much less money (and a ton less effort) than a cooler and the pieces needed to convert the cooler.

And, with BIAB there is never a worry about a stuck sparge, which is something that I have been thinking about lately.

Some people say that you get a lower mash efficiency with BIAB.  Patrick Hollingdale from http://biabrewer.info/, (the guest on Brad Smith's podcast) though says this is not necessarily true.  In fact Patrick says that many BIAB brewers get better efficiency.  The other "knock" I've heard on BIAB is that you won't necessarily get the crystal-clear beer that you can get by recirculating the first of your drained wort, but I've never really worried about getting crystal clear beer, plus I think with Irish moss (or other fining agents) and/or crash cooling your beer before bottling, you can probably get similar results.

The only thing I'm not sure of is keeping the mash temperature steady for an hour (sometimes over an hour in some of my current mash profiles).  My cooler-style mash tun holds heat very well for well over an hour, but obviously a stainless steal pot will not maintain heat as well as an insulated cooler.  Of course, since the mash is in the pot, I could apply heat to warm things up if needed, but I know if I do that, I'll over compensate at some point.  I think some people use blankets over their pots to keep the temperature steady.  I just don't know how well this will work, especially in the winter.  Maybe its just a matter of getting used to what works.

I guess the other thing that might be an issue with me is that my brew pot has a thermometer probe build in that could potentially poke a hole in the bag (which would probably not be a good thing).  I'm not sure what to do about that.  Do I just have to be aware of where that is, and be careful when adding / removing the bag?  Not sure.  I might even be willing to remove the thermometer if I can figure something to plug the left-over hole with.

So, at the very least, I think I am going to give Brew-In-A-Bag a try.  All I have to lose is potentially the cost of a grain bag.  I'll let you know (right here on this blog) how it goes next brew day.