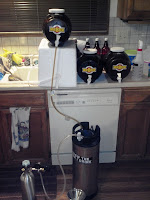 So, I've mentioned that I bribed the people I work with in an attempt to get them to donate to the 2nd Wind Fund. It worked, so I had to brew up more Stouticus American Stout (darn!). I also brewed up a beer that I called Hoptoberfest , which is a Vienna Lager with much more late addition Hallertauer and Crystal hops than you would traditionally get in a Vienna Lager. You could almost call it a love-child between my 15 Year Anniversary Amber Ale and my Rocktoberfest Lager. It was designed with lots of Munich and Vienna malts, fermented with lager yeast at (mostly) lager temperatures, but hopped like the 15 year. Sounds absolutely yummy ... doesn't it? The sample I had certainly tasted like it would be good.

So, I mentioned last week (see Back to the mash tun) that I bottled up Stouticus by using one of my corny kegs and my Blichmann Beer Gun. I did the same thing this week with Hoptoberfest. 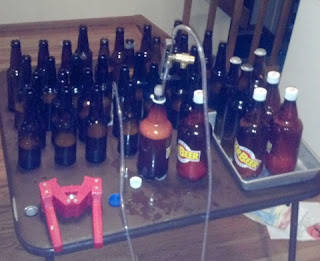 I don't think using the keg as a bottling bucket was necessarily what John Blichmann had in mind when he designed the beer gun (maybe he did), but I actually really like how the process goes. I boiled 4 1/8 oz table sugar in a cup or two of water, cooled that down, and added it to the sanitized keg. Then I drained Rutt and Tuke (those are the names of my Mr. Beer fermenters) into the keg. I pressurized the keg and filled bottle after bottle using the Beer Gun as it is meant to be used. I did not purge each bottle with CO2 because I figure the bottle carbing will purge oxygen for me. Obviously, I never purged with CO2 when I did bottling buckets.

Here is a little video of me filling a bottle:


The whole thing didn't seem nearly as bad as using the bottling bucket had been.

Connor even helped me cap: 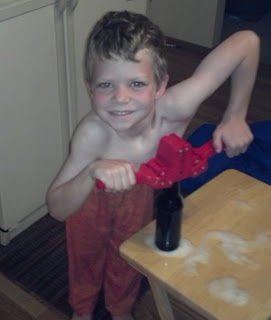 For the family activity of the day, we headed over to Eldorado Canyon State park where we hiked and climbed and caved and explored and threw rocks into the river. BOY did we throw a lot of rocks in the river. My arm is sore.