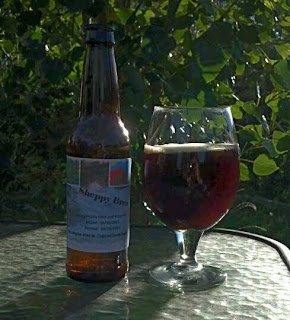 This weekend, I poured myself a couple of bottles.

Regardless whether you call this a black IPA, a Cascadian dark, American style black or India Dark Ale, SheppyBrew's Psychotically Dark and Bitter Ale is wonderfully dark and hoppy and pleasant to drink.

Its color is more of a dark brown than black. This particular pour (the one if the picture to the left) had a thin off-white head, which stuck around for the whole drink. As the beer glass emptied, the lacing was significant. The other beers I've had from this batch have really had a thick substantial head, so I'm not sure what was up with this bottle.

The aroma is mostly grapefruit citrus, although it doesn't come across as strong as I would have liked. Perhaps my dry hopping should have been cascade or centennial or some other traditional American aroma hop. There was a bit of an earthy hop aroma as well, and maybe a bit of chocolate from the dark malts.

The first thing that I noticed in the flavor was the deep rich dark chocolate malts. There is also a bunch of Columbus hop flavor. These hops come across with a citrusy grapefruit overtones with a nice earthy base. There is a nice firm bitterness, although it does not come across as highly bittered as most double IPAs. The chocolate malt really balances out the bitterness. The earthy citrusy hops really compliments the chocolatey flavors.

I would call this a medium bodied beer, although the FG suggests it might be more full-bodied than I detected.

There are only a couple things I might change with this beer if I were to brew it again. I would try to make it a bit more attenuated for a bit more dryness (but not much). Not sure how much I'd be able to do here considering it is an extract brew. The other thing is try to get more citrusy hop aroma. It might make sense to dry-hop with cascade or centennial rather than columbus.

Really a wonderful beer to drink. It is too bad I only made a Mr. Beer size batch. I would love to have more of this available for consumption.
Posted by Sheppy Brew Master at 10/09/2011 08:30:00 PM