I was looking through this blog's stats the other day. In the "Search Keywords" section for the day. One of the search entries was "шрек и пиво".

It is interesting to me, though, that someone out there came across my blog while looking for Shrek and beer. I wonder if he or she found what they wanted on my blog or if they just looked real quick, decided they were really looking for something else and then went on the the next search result. I'll never know.

Shrek and I do share a beer from time to time. He is a good drinking buddy because he likes the same things I do. He doesn't whine that "this beer is too bitter" or "I don't like dark beers". For the most part, he doesn't really say much about the beers at all, but I can tell he likes them because he always has the same contented smile on his face. 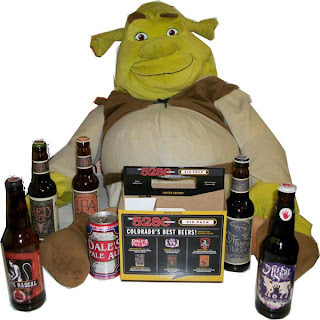 Speaking of bitter beers ... my wife is a fan of my Ello Poppet Czech Pilsner. I am too, but I have a history of liking hoppy beers whereas she tells me (and whoever else will listen) all the time that she does not like them. The Beer Model and I have argued about whether Ello Poppet is in fact hoppy or not. She says it isn't hoppy because she doesn't like hoppy beers. I say it is hoppy because ... well because it is hoppy. I actually know exactly how much hops I put in the beer, and it was enough to make it hoppy.

When she says she doesn't like hoppy beers, she means that she doesn't like bitter beers. I think this is true with most people. While Ello Poppet does calculate fairly high in IBU (international bittering units) and its BU:GU ratio (bittering unit to gravity unit) compared to SheppyBrew's other beers, there is not too much perceived bitterness.

Hops, of course, provide bitterness to beer. Non-beer-geeks sometimes consider that a bad thing. Even if you are not a "hop head", though and don't like "bitter", this bitterness is important. The hop bitterness needs to be in there to balance out the malt sweetness. An overly sweet beer just is not that good. In fact, I personally prefer an "overly" bitter beer to a sickenly sweet one. This is a matter of opinion, and some people prefer sweeter beers like bocks. Even these malty sweet beers, though require a some bitterness to balance things out.

If you are a home-brewer, you probably have seen the image below (Gravity/ Hops Ratio). It demonstrates the concept of this bitterness to sweetness ratio. If you have ever looked at any of my recipes on SheppyBrew.com (Ello Poppet Czech Pilsner for example), one of the things I always list is my planned BU:GU ratio. Basically all this number does is give you a general gauge as to where the balance of bitterness (hops) to sweetness (malts) falls. To calculate, you simple take the IBU's of your beer divided by the last two digits in your original gravity (OG). So, if you have 25 IBU and a 1.050 OG, your BU:GU ratio is .5.

A .5 ratio would be exactly balanced. A 1 ratio is very bitter. Anything in the .33 or lower range is usually too sweet for me. 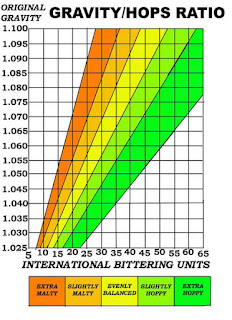 So the chart above would call the Ello Poppet "Extra Hoppy". Or, a better description would actually be "Extra Bitter".

Well, the answer is complicated. Hoppiness and bitterness are not really the same thing. In addition to bitterness, hops also give flavor and aroma. The longer you boil your hops in your wort, the more bitterness you extract. If the hops are in the boil less time, you get more of the aroma and flavors. Back to the recipe ... over three quarters of my hops are added to the last 5 minutes of the boil. These hop additions provides not much bitterness and lots of hop flavor and aroma.

I think (maybe) there is a little bit of a psychological component here. Flavor perception has more to do with the brain than it does the tongue.

The Beer Model associates bitterness more with the American citrusy and piney hops that her husband generally uses in most of his hoppy beers. While this beer's IBUs come in just as high on the BU:GU scale as just about everything I have made, the wonderful flavors blend together to take the mental focus away from the bitterness and more toward the flavors.

To be honest, I don't really know why the Beer Model likes this bitter beer. It does illustrate, though, that brewing beer is much more of an art than a science. And, sometimes, I just get lucky.


Shrek has not had Ello Poppet Czech Pilsner, yet. I'm sure when he does, he will give me that same content smile he always have when we drink together.