I am in the "love them" category.

As I mentioned last week, Saturday was #SourBeerDay. I really thought I was going to use the "holiday" as an excuse to stop by Crooked Stave's taproom and try a couple of Chad's beers. I never got around to it. Actually, I didn't even drink a sour beer and #SourBeerDay.

But what did I do?

Well, the big Sour Beer related thing I did for #SourBeerDay weekend was to preform a sour mash of my long anticipated  Rationalité Poison d'Ereeeek. I have been planning on doing this beer for some time when I saw the #SourBeerDay announcement, I decided to use that as an excuse to go ahead and finally do it.

In  SheppyBrew and the Sour Mash, I talked briefly about how I was planning on doing my sour mash. Since then, I made some changes. I decided to sour mash the whole of the grain bill. I decided to not add cherry puree. I also took out the champagne yeast from the recipe.

You can, of course, look at the recipe on SheppyBrew.com on Rationalité Poison d'Ereeeek. I started brewing this batch Friday night. I mashed the grains for a couple of hours at very close to the recipe mash temperature of 154. Instead of cooling with water like the recipe calls for, I decided to just let the mash cool on its own.

Early Saturday morning (around 3:30 or so), I checked the temperature and found it was just a bit above 120. At that point, I added more grain so that the Lactobacillus on it would inoculate the mash. I purged the top of the grain bed with carbon dioxide. I also added foil to theoretically help keep oxygen out of the mash. 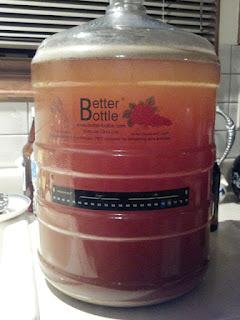 Since I was up, and because I would need my carboy to ferment the Rationalité Poison, I decided to bottle my latest batch of Laser Salt Sandy Blonde Ale. This is the first time in a long time that I have bottled a whole batch of beer. Boy, did it make me appreciate the fact that I keg most of my batches now.

I used the beer gun from a keg as a bottling bucket. This is how I bottle most of my beers now (when I bottle), using the keg as a bottling bucket. Unfortunately, this wiped out my little CO2 tank. I think I had plenty and that perhaps I overdid the purge of the sour mash. Luckily, at least, I got all but three bottles done before the CO2 ran out. Those last 3 are labeled and I will be sure to drink those first, although, the oxygen will probably not be an issue with the natural carbonation. I also almost ran out of bottle caps. I had one left at the end of the bottling. 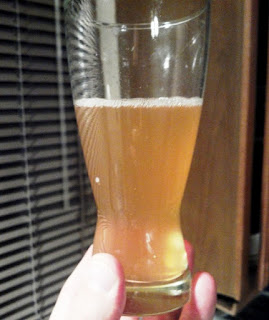 Anyway, I got 29 12oz bottles, 7 bombers, 2 liters, and my European growler filled. They are carbonating in the basement. These will be about perfect in time to give to "Gretchen" (our gluten-sensitive friend) as thanks for watching our kids over GABF weekend.

So, I had bottling done early in the morning.

The Shepards decided to ride our bikes in Denver most of the day. 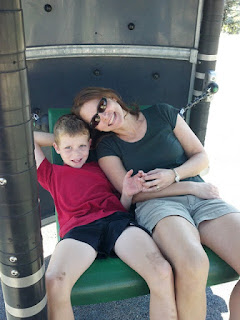 After the bike ride, I dragged the family to Strange Brewing Company where I was hoping to get a sour beer for #SourBeerDay. They didn't have anything sour. The closest they had was their Cherry Kriek. I remember this being more sour last time I tried it. It was not really sour at all this time. Oh well. 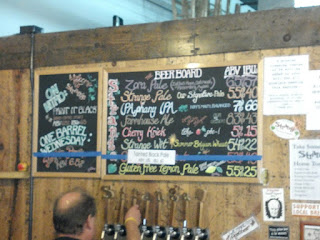 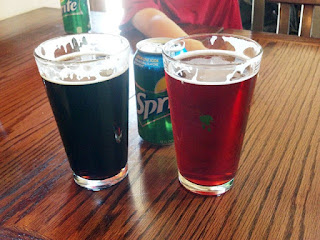 After getting home, late in the afternoon, I dipped my finger into the sour mash, and tasted the liquid that came up. It was a nice clean lactic acid sour. Very nice.

It was not until late at night that the temperature of the mash was at about 100. At that point, I boiled a little under a gallon of water and mixed it in. This brought the temperature up to 120 for the night. As I had run out of CO2 in my small tank, I didn't purge the mash again. I did cover with wrap in hopes of reducing oxygen exposure.


The next day, before church, I sparged the mash into my brew pot. Unfortunately, the liquid did not taste quite as clean as it had the day before. It was a bit vinegary, which means it was exposed to too much oxygen. I probably should have drained and sparged when I tasted the nice clean sour. Live and learn I guess. I am not sure if the vinegar flavor will age out at all. We will see. 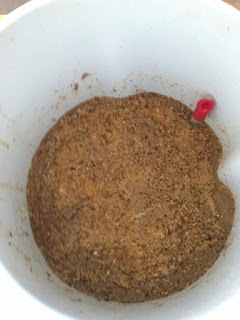 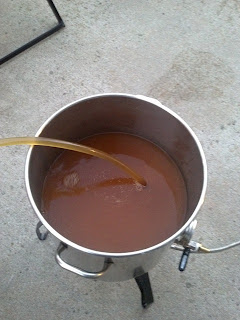 The brew day was pretty typical. I got about 6 gallons of wort into the fermentor and pitched the yeast in the mid-60s. My OG was right on the 1.052 I had planned for, although I did dilute with about half a gallon of water to get it down to the that 1.052. 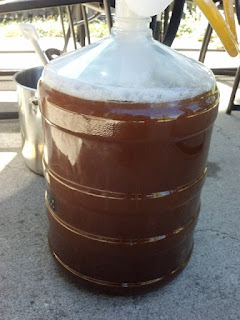 The next day, the fermentation had taken off. I added a blow-off tube which was needed before the end of fermentation day 2.

After the fermentation slows down, I will rack into a secondary carboy. I'll probably let you know how it tastes at that point.