Brewing Helles in a Hand Bock-sket

I brewed Helles in a Hand Bock-sket Saturday. This was my 5A. Maibock/Helles Bock beer for my goal to expand my brewed recipes to at least one beer in all 23 BJCP beer categories. After finishing up this Maibock, I now only have 7 more categories I need to cover.

I got a much later start than usual for a brew day. Until around 9 AM or so I had not decided whether I was going to brew Saturday or Sunday. As I usually get started before the sun comes up, this brew day felt sort of weird.

I hit my strike water perfectly to get the planned 152 mash temperature. I let the mash go for a couple of hours while running some errands, doing laundry, and playing WII with my kids. The mash did get as high as 156 and was down to about 150 by the end. That falls pretty well into the plan. 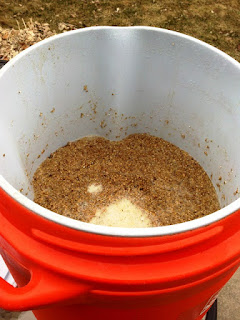 The wort came out a perfect golden color and my pre-boil gravity was a bit on the high side. I ended up adding about half a gallon of water over the first half an hour of the boil. 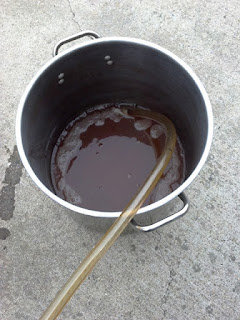 There was nothing real remarkable about the boil. I added in Magnum hops at the 55 minute mark. I added yeast nutrient and whirlfloc in at appropriate times. 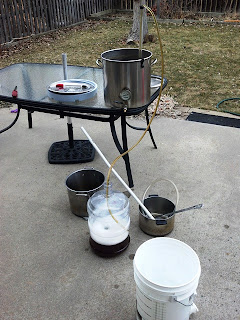 I chilled the wort to about 60 degrees with my wort chiller and then racked the wort using my auto-siphon into my smaller Better Bottle carboy. The picture below shows significant "gunk" left behind in the pot. 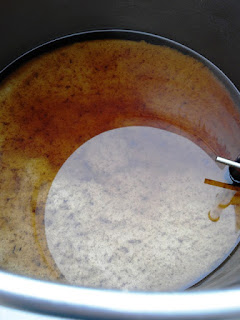 I let my little carboy sit in an ice bath for half an hour or so to get it down below 50 degrees. I added in yeast that I had harvested from Khazad-dûm Black Lager into my bigger carboy, and then racked from the little vessel to the bigger one, letting the swirling wort from the transfer mix the yeast in.

I had everything cleaned up and the house somewhat presentable for my Son's sleep-over birthday party.

The "big" Better Bottle carboy is now sitting in my gott cooler mash tun surrounded by coldish (about 50 degree) water. Fermentation started pretty quick. I saw significant bubbling and nice kraussen early Sunday morning. I will let this ferment cold for about a week and then let it rise slowly into the 60s for another week or two. I should be kegging in early April and the beer should be ready to drink in May.

And so, I had another great brew - day. Everything went as planned. I am looking forward to the beer.

My son's birthday party went well too. I sat the boys down to watch a movie while I watched the Blackhawks defeat the Stars 8 to 1. What a great day!

I think my next brew day will have to be something my wife likes. We have not had anything in the keggerator that she really likes for quite some time. At the moment, I think I will be brewing Buckwheat's Belgium Pale Ale, but that certainly may change between now and then.
Posted by ESheppy at 3/18/2013 06:49:00 AM