You see, everyone who I give my beers to give me positive comments (except my sister), but most of these people are not critical beer tasters and none of them are actually particularly objective. The whole point of a home-brew competition (other than the potential for honor and glory) is to have trained, certified judges to evaluate and comment on your beer, so that you can improve the quality of your beer. 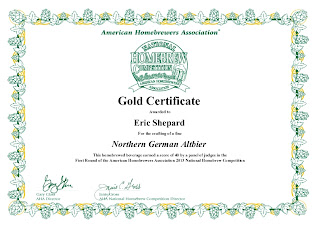 In the Beer Judge Certification Program (BJCP) standards, a beer is scored from 0 to 50.
If you want more explanation of what all those mean ... take a look at the BJCP Cover Sheet.

In order to advance to the National Finals in the National Home-Brew Competition (NHC), you must place 1st, 2nd, or 3rd in your category and you score at least a 30. If no one scores a 30 in a given category, no one advances. I've been told that if you are able to score a 35 or higher, you give yourself an excellent chance to place in any given home-brew competition.

Of course, I have mentioned my 1st place winning beer, but I actually entered 4 beers into the National Home-Brew Competition. 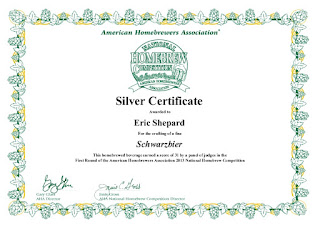 I usually tell them, "everybody gets a certificate". Even though it is not technically true, I do sort of feel like the sentiment is right. Just like in kids' sports, we don't want any brewer feeling bad about themselves, so we give most of them a "participation prize". To be honest, I don't know what percentage of the beers score over 25, but I have to think that for the most part, if you are going to go through the effort to register and get your beers to the drop-off spot, you beer is at least "good". I would think that the vast majority of beers at least got Bronze Certificates. 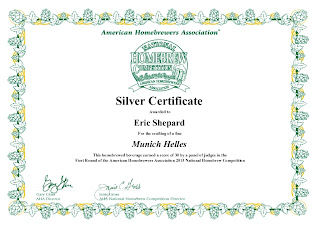 In fact, I am somewhat ashamed of how Quarter Life Crisis performed. I sort of think some of the comments were contradictory, but it appears that the judges don't think my QLC is hoppy enough to be considered a "West Coast" Red. Both judges did tell me that it would have done better in the American Amber category.

I think maybe most of my issue was that this beer was just not fresh enough for the hops to come through. If I were a more organized competition brewer, I would absolutely would have scheduled it to be finished closer to the judging date.

But still, my QLC, and American Amber? I feel shame. For what it is worth, one of the few people I have given this beer to who actually has a tasting pallet that seems somewhat objective seemed a little offended and angry at that evaluation. He told me there was no way that is right. This probably supports my theory about sending in a fresher beer. He had it right out of carbonation. 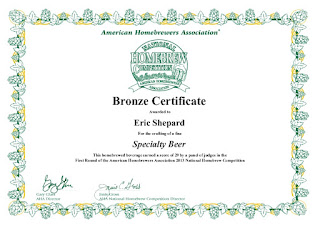 At the same time, Khazad-dûm Black Lager would have benefited with a little age and better carbonation. When I dropped off the beers, KD had not even been tasted, it was so young. Hoppy beers you want fresh. Malty dark colored beers need some time to meld the darker roasty flavors with the base beer. To be honest, the 31 was a pleasant surprise.

I knew Snowball's Chance (in) Helles had problems, so I am also pleasantly surprised that it scored a "Very Good" "Silver Certificate" 30 points. When I first tasted this beer, it was completely flat. I tried to fix it by adding priming sugar, and after that, it just didn't taste quite right to me.

Actually, one of the 2 judges gave me a 36 on this beer, so if I would have been lucky to get two judges like this one, I might have advanced another beer. Just so you know, they apparently don't average the two judges to come up with the final score. The other guy did NOT give me a 24.

But, both judges noted a distinct DMS character. Dimethyl sulfide (DMS) is an organic sulfur compound, which manifests itself as a characteristic taste and aroma of cooked corn or creamed corn. It is a flaw that comes through mostly in lighter colored beers that use lots of Pilsner Malts (like for instance my Munich Helles). The reason all my boil times are 90 minutes is so that this characteristic has a chance to volatilize and go away. In fact, both judges suggested a longer boil to help with this in this beer.

The thing that bugs me is that I don't remember getting "cooked corn or creamed corn" flavors or aromas from this beer. Maybe the "didn't taste quite right" that I mentioned above is me not quite recognizing the "cooked corn or creamed corn". I have actually not tasted this beer again since getting the score sheets. Maybe when I do, the "corn" will click and I will better recognize the character in the future.

But, it could just be that I am not sensitive at all to DMS, which means all my light pilsner-based beers in the future could be suspect even when I think they taste fine. And, like I mentioned, I already do the thing everyone says will fix this flaw. I do longer boils specifically to volatilize and eliminate the DMS. I suppose I could boil a little more rigorously.

So, I did well in my 2nd home-brewing competition, but I do have lots of room for improvement. We will see if I can get more organized with brewing schedules, and try to figure out this DMS thing. In the meantime .... Go Blackhawks!
Posted by ESheppy at 5/20/2013 06:23:00 AM