The guys from Basic Brewing Radio have recently done a couple of videos about a really simple hard-cider they tried.  I think they mentioned it in a couple of their "radio" podcasts as well.

The recipe for the cider is really simple.  The ingredients are:
Basically, all they did was buy a gallon jug of apple cider from the grocery store, put the yeast in, and let the cider ferment for a couple of weeks.  They made it twice.  The first time they used a champagne yeast.  The second time they used a package of Fermentis US 05, which is a pretty neutral dry ale yeast.  It sounds like they prefer the ale yeast because it doesn't finish quite as dry.

I was in the grocery store on Friday and saw some apple cider on the shelf.  I thought to myself, "Self, I have some Mr. Beer dry yeast that I will likely never use for beer.  Maybe I should make the hard cider that James and Steve made."  I agreed with myself and picked up a jug of spiced apple cider to bring home.

Then, later that night, I took a specific gravity reading (1.048), put in 3 packets of Mr. Beer under-the-cap yeast, let the yeast hydrate for a few minutes, shook up the cider, and covered the jug with aluminum foil.

Now, I'll let the yeast eat the cider sugars and produce alcohol.  In a couple weeks, I'll take another gravity reading and try the hard cider.  Pretty simple.  We'll see how it goes.  I've never made hard cider before. 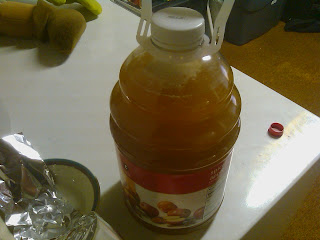 If you are interesting in seeing the videos, they are:
Their YouTube channel is simply:  http://www.youtube.com/basicbrewing

[Edit ... around 6:00 AM on Saturday]:  The cider is bubbling away.  Like James said, there is no krassen like beer, just a lot of little carbon dioxide bubbles rising to the surface.