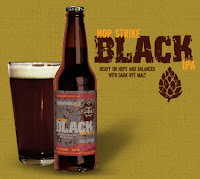 I've talked about Tommyknocker Brewery quite a bit in this blog. It is a brew-pub in Idaho Springs that the Colorado Shepards go to quite a bit.  I like the location. I like their story. I like their food. I like their beer. Additionally, they have the best AHA pub discount out of all the places I've used my discount so far.  We end up there for lunch quite a bit after spending the morning in or around Idaho Springs. Quite often, we plan return trips from the mountains so that we end up by Idaho Springs around lunch time as well.
Recently, Tommyknocker Brewery significantly updated their website. I think the new site looks much better than the old one. They also updated the look of their graphics for logos, packaging, etc. Personally, I thought the old logo and other graphics were great, but I will probably get used to the new look.

According to their web-site, they are expanding. That is good too.

But, to me, the best news is that they decided to make their Hop Strike Black IPA a regular member of their beer lineup. Last time I asked, the bartender I was talking to told me that it was just a seasonal and would not be around too much longer. I communicated my disapproval.  I told him that Hop Strike was the best beer they make. Apparently, he agreed and convinced the owners and / or brewers to keep it on tap permanently.  I'm sure all he had to tell them was "Hey ... Shep wants us to serve Hop Strike year-round".

Not only are they keeping the Hop Strike Black IPA as year-round brew, but they have started bottling and distributing it. Personally, I rarely buy Tommyknocker beers from a liquor store since I go to the pub so much, but it is nice to know I can get it if I want to "down here" in the metro area if I want to. And, in fact, when I saw some in the liquor store, I did grab a couple of bottles.

Yesterday, we decided to go to Idaho Springs and visit the Argo Mine and Mill. This gave me the opportunity to go to Tommyknocker and buy a hat with the "old" logo on it. Of course since we were there, we had lunch and I had a couple of beers.

Sunday (after coming to terms with the fact that we had not been raptured), the Beer Model and I kegged up her Summer Lovin' American Wheat Ale. We had over 88% attenuation, which means the beer is almost 6% ABV. That is a bit higher than we were shooting for, but the sample tasted pretty much exactly how I had expected it to taste. It is light with just a touch of citrus flavor from the orange peal and coriander.

We are force-carbonating it right now at about 31 psi. Its carb level should be a bit higher than my first keg. Tracy is hoping to share this with her family when they come to visit in July. I'm a little afraid that if that is the goal, we should have brewed it a bit later. We'll see if it lasts.
Posted by ESheppy at 5/22/2011 11:05:00 PM