We have the kids of "Gretchen" this weekend. If you don't remember, "Gretchen" is the friend for whom SheppyBrew created the beer "Free the Glutens! APA" (FTG). You can read all about the story behind this beer on this blog by reading through the "Gluten Free" label on this blog and/or the Free the Glutens! APA on the SheppyBrew website. Follow those links and read away.

So, not too long ago, knowing that we would have "Gretchen's" kids this weekend, I brewed up my second batch of FTG. I gave myself more time than I did for the first batch, but still not as much as I should have. I decided that I would use the kids as bottling assistants and make "Gretchen" take home the FTG to carbonate herself.

Unfortunately, out of 4 boys here this weekend, only one wanted to help. But, I'll take what I can get when it comes to bottling help.

You probably already know or don't really care, but just in case I'll tell you anyway: FTG is naturally carbonated. This means, we add a bit of sugar to the beer (regular white table sugar usually for SheppyBrew), and let yeast eat this sugar. When yeast eats sugar, it burbs out carbon dioxide. If enough carbon dioxide is trapped in the beer bottle with the beer, carbonation occurs.

So, my bottling assistant added 2.25oz sugar to 2 cups water, stirred it in and let it boil for a few minutes. The boiling is to sanitize the solution of sugar water before adding it to the beer. After boiling, I cool the covered pot in the sink in an ice bath.

Of course I took a sample to get a final gravity reading. You probably remember from grade school science class that specific gravity is a way to measure density of a water-based solution. To get the final alcohol of a particular beer, I take a gravity reading of the wort on brewing day (original gravity or OG for short) and then another gravity reading at bottling time (final gravity or FG for short). This beer started at 1.053 and ended at 1.020. This calculates to 4.3% alcohol (by volume). I let my brewing software do the calculation for me. If you want you can google the actual formula.

It is important to have clean and sanitized bottles because germs can make beer taste bad. I don't want bad beer. I assume "Gretchen" doesn't like bad beer either. I use Star San sanitizer, which is a no-rinse sanitizer made specifically for brewing. It is very effective and since it is no-rinse you don't have to worry about off-flavors coming from it.

Finally, we emptied the bottles of sanitizer and used a bottling wand attached to the spigot in the bottling bucket to fill each bottle. After filling each bottle, we added a cap and used that read capper to crimp down the caps to the bottle.

We got 2 1 liter bottles and 18 12 oz bottles. As I mentioned above they need to carbonate for a couple of weeks. To carbonate, I let them sit at room temperature for two weeks. After that two weeks, they should be ready to drink, although I might suggest "Gretchen" waits a little longer just because I know it is torture to wait. 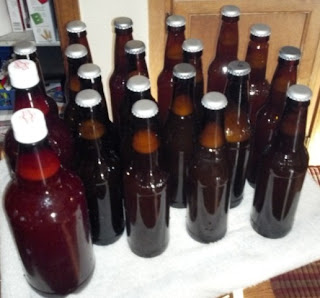 So, there you go, batch 2 of FTG is bottled up. I will send most of these home with "Gretchen". I will keep a couple for myself to taste and comment on.

I will let you know how I think it tastes in a few weeks. I'll let you know how "Gretchen" thinks it compares with batch one whenever she gets around to telling me. Actually, I am going to ask her to comment on the SheppyBrew facebook page. If you don't already, please like us here: http://www.facebook.com/SheppyBrew
Posted by ESheppy at 3/17/2012 09:04:00 AM