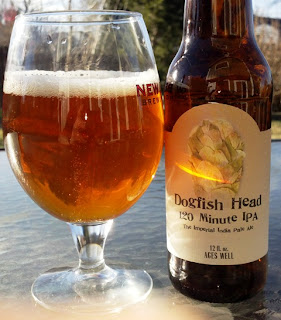 Generally speaking, I am a big fan of Sam Calagione, his brewery, and his brewery's beers. What craft beer drinker isn't? I have Sam's book and I have read most of it. I loved his brief T.V. series and am still hoping that it gets picked up again. The dogfish way defined (and continues to define) lots of what the craft beer movement is all about. Dogfish Head always has the longest line at GABF. I love the brewery and all that it stands for.

I hate to say it, but I am not really a fan of the Dogfish Head 120 Minute IPA.

If you are a craft beer fan, especially if you are a hop-head, you probably think I'm an idiot, but I just don't rank the 120 minute IPA up with my favorite beers.

Don't get me wrong. It is a good beer. I would, of course, rank it above BMC beers, and I am extremely glad I tried it, but it is not something I am going to seek out again. For me, it is too expensive and contains too much alcohol for a beer.

If you are a hop-head who really loves big IPA's, you are very likely going to love it. According to their website, it is 15-20% ABV and 120 IBUs. To me, all that alcohol makes it too sweet and "boozy". I don't feel that the hops cover that sweetness. Untappd has the 120 minute IPA at 4.16 stars out of 5, so my opinion is not shared by the typical craft beer drinker.

I suppose you could say it is just too extreme for my taste. Perhaps I'm just not worthy.

Again, if you are a fan of HUGE alcohol, you are going to like this beer. Don't take my word for it. Give it a try.