Last night, I kegged up my Pompously Illegitimate Red Ale (PIRA for short).

I have to say that I am very pleased with the results so far. I have not had the AB in awhile, but I think the malt and yeast characters are pretty close. I am certainly going to do a side-by-side tasting at some point down the line (stay tuned for that SheppyBrew fans). I mentioned in Brewing PIRA that I was a bit concerned about how the yeast starter tasted, but in this beer (or at least the sample I had last night going into the keg) I really liked how the WLP 007 Dry English Ale yeast fermented. It gives a nice dry character and it flocculated extremely clear. I really should have harvested this yeast, but decided I would rather get it in the keg than delay to prepare the whole yeast washing process. 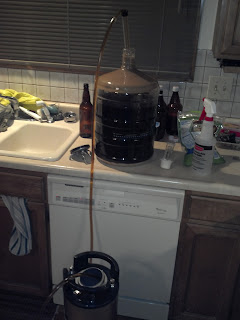 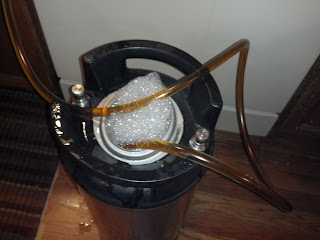 After kegging the beer, I used my beer gun to fill 6 22oz bottles and 1 PET liter bottle. This time, I primed the bottles with the Mr. Beer suggested amounts. Usually when I fill bottles at kegging time I prime the whole keg and bottle from the mixed sugar / beer solution. I expect that this means the bottles will be slightly over-carbed, but I am ok with that.

I do have a volunteer at work who offered to take one or two of those bottles to give me a second opinion on how the beer compares to Stone's Arrogant Bastard.

I will be sure to let you know what I think and what my co-worker thinks after the beer is carbonated and tasted.


So, I am excited about drinking this beer, and I would be proud to serve it to Mitch and Greg of Stone Brewery (or whoever else at the brewery would be interested in trying it). It isn't Arrogant Bastard, but it will be delicious. I am sure in a couple of weeks I'll be telling you that Pompously Illegitimate Red Ale is better than Stone's Arrogant Bastard. Pretty pompous of me, but that is how I roll.