A couple of nights ago, I was listening to The Brewing Network Sunday Session February 13, 2012 episode with Sun King Brewery. The main part of the show was a great interview with Clay Robinson who is one of the founders, owners, and brewers at Sun King Brewery of Indianapolis, Indiana.

Sun King won a ridiculous number of medals at the 2011 GABF. If my memory is correct, they got 4 golds, 3 silvers, and 1 bronze. Getting any kind of medal at the GABF is an amazing feat. Getting 4 golds is mind-blowing. Getting 8 medals is downright unbelievable.

If I have had any Sun King beer, it was at GABF. It doesn't appear in my notes, so if I had any I don't remember anything about it. I hope I remember to try to find it this year.

My favorite part of the interview was when Clay talked about their Popcorn Pilsner. If you download the episode from the link above, this part is at about the 1:42:20 mark of the pod-cast.

One of the ingredients used in Popcorn Pilsner is (are you ready for this?): Popcorn.

These guys literally popped 150 pounds of Indiana popcorn using 8 air-poppers. It apparently took 14 hours of popping the corn. Everyone in the brewery had to chip in. I think he said this 150 pounds of popcorn was used in a 30 barrel batch.

Now, I know that popcorn exposes the starches just like malting would and that popcorn could be used in a batch of homebrew. I have in the past thought about using popcorn as an ingredient, but it never made it from my head onto a recipe. 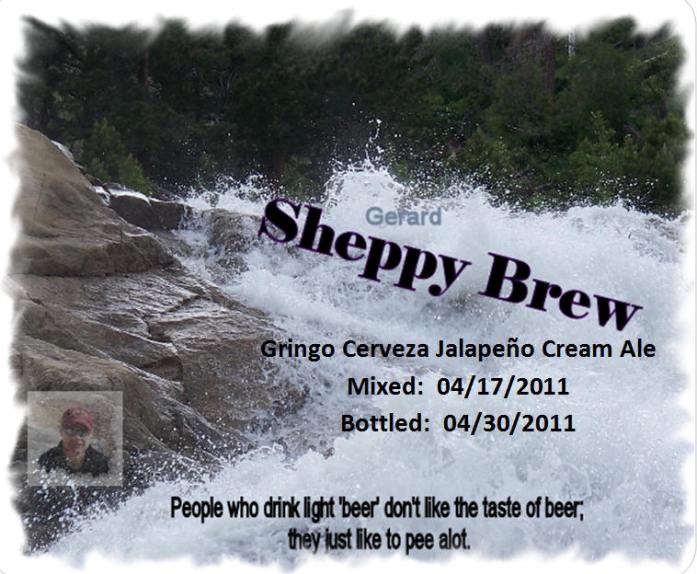 A perfect application for using popcorn in a home-brew (IMHO) would be in something like my Gringo Cerveza Cream Ale. I think it would work well in either the Jalapeño version or the non-Jalapeño version of the beer. I figure 150 pounds of popcorn over 30 barrels scales down to about 13 ounces of popcorn over 5 gallons. This is amazingly close to the 12oz of flaked corn I added to the SheppyBrew Gringo Cerveza Cream Ale.

And so, it is decided. I am going to add popcorn to my next recipe of Gringo Cerveza Cream Ale. I am sure that "Jerry" (who is the most vocal of my Gringo Cerveza Jalapeño Cream Ale fans) will approve.

Cinco De Mayo is coming up ... I should think about getting this beer on the schedule soon.

If you are interested, here is a youtube video that Sun King put out about their PopCorn Pilsner.