So, if you've been following my blog or SheppyBrew's Facebook page or my twitter feed over the past few days, it does not come as a surprise that I brewed Sunday. I have made no secret of the fact that I was planning on brewing "Khazad-dûm Black Lager". As I mentioned, this is the Category 4 representative of my quest to brew at least one all-grain batch in every BJCP beer category (see SheppyBrew Styles).

We got some snow overnight, so this brew day was in the garage. I got started around 5 AM and had the mash going by 5:30.

This time, I left the dark malts (Carafa III) out of most of the mash, adding them in with about 10 or 15 minutes left. I decided to try this because various guest on various podcasts say this keeps harsh roasty flavors out of beer. As my mashes are usually pretty long, this seemed like a decent idea to me, so I decided I would try it out with my Schwarzbier. I think next time I do a black IPA, I will use the same technique.

Other than that little tidbit, the mash went as usual. Well, actually, it went better than usual as I got my strike water and therefore my mash perfect before adding the grain. I didn't have to do the yo-yo technique of adding cold water .. overshooting .. add hot water ... repeat as needed.

I did make a judgement error while draining the mash tun the first time. I decided to go inside and play a video game. When I came back out, the pot I was draining in was completely full and some wort ended up on my garage floor. 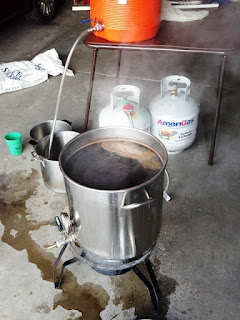 Turns out, this was ok, because I got plenty of volume at the right pre-boil gravity.

Usually, when I brew on Sundays, I let the mash go through church. This time, we were going to the "late" service, so decided to try to get all the way through the boil and chilled before it was time to go.

The boil went well. The Columbus hops I had were a little lower in alpha-acids than the recipe design originally called for, so I added some more and ended up using them with 50 minutes left in the boil instead of the planned 60. Not a big deal.  The recipe up on SheppyBrew's Khazad-dûm Black Lager now reflects the new amount and time values. 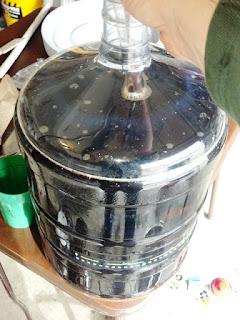 After the boil, I chilled to about 65 degrees using my wort chiller. Then, I racked into my carboy and put the whole thing in my mash tun with ice water to cool the rest of the way into the 50's.

I let the carboy sit in this ice bath until the wort was at about 55 degrees. Then, I racked into two Mr. Beer fermentors with my harvested yeast from Snowball's Chance Helles.

Those fermentors are now in my cooled fermentation coolers. 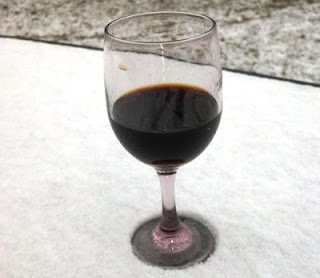 And now, I probably ferment for about 3 weeks and should be kegging this up in early March. The next beer I brew will most likely be a Helles Bock to take care of Category 5. 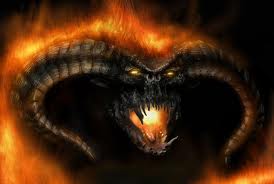