Every year since I started home-brewing, I have brewed a special X-Mas ale for the holidays. Each year, the recipe is different, but so far it has always been pretty dark, malty, and fairly high in alcohol. Each has had special holiday flavoring.

You can read quite a bit about these X-Mas Ales (including this post) by looking at Sheppy's Blog: X-Mas Ales.


Last year's version was a dark, rich, caramelly winter warmer with a table spoon of peppermint extract added in the secondary. 2011 was exactly the same, except I used hazelnut flavoring rather than peppermint.

But, as you know if you follow this blog, in 2013, I have been concentrating on brewing BJCP styles that I've never brewed before. I declared it my goal to have brewed at least one all-grain batch of all 23 of the BJCP categories by the end of the year (see SheppyBrew Styles).

After Brewing the Sloth Man English Mild, I had four categories left to brew. I got to thinking that it would be a good idea to make my X-Mas Ale with one of these. I don't want to get close to the end of the year and still have more than one to brew.

For awhile, I thought I would make my 2013 X-Mas Ale a Barleywine to satisfy my Category 19 Strong Ale requirement. But, I decided I was too close to Thanksgiving to have a Barleywine properly aged in time for the holidays. Then, it occurred to me that it would be easy to just take the same basic base recipe of the last couple years and replace some of the base malt with smoked malt.

I decided to go with a 22B. Other Smoked Beer. 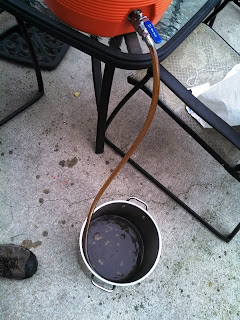 I did basically decide to go with the 2011 and 2012 base recipe. I replaced some of the base malt with some Cherry Wood Smoked malt from Briess. I tweaked the base malts to get close to the ABV and color of previous years. I targeted 20% of the grist to be smoked malt. Eventually, I ended up with the recipe: 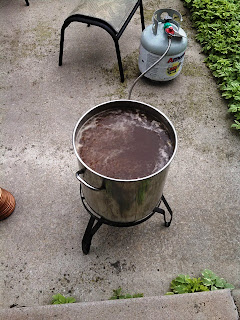 I brewed it Sunday. It rained most of the day, so I set up my camping canopy to keep the rain out of the brew pot during the boil.

Everything went pretty much as planned. I had more issues than usual getting to the right mash temp, but eventually I got there. My pre-boil gravity was a couple points lower than I was going for, which ended up flowing through to the post-boil gravity as well. I am fine with 1.074 instead of 1.076. 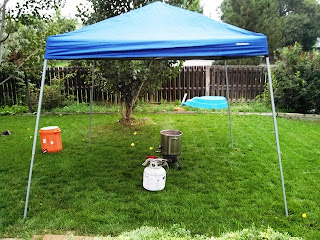 Last weekend, I brewed my Sloth Man English Mild, which has the same yeast I wanted in this X-Mas ale, I racked Sloth Man into a secondary and put the X-Mas Ale straight onto the Sloth Man's yeast cake.

As you may be able to imagine, this made the X-Mas Ale fermentation take off almost immediately.

The beer is bubbling away with a blow-off tube right now.

Of course, I tasted the gravity sample of the yeast. It has a pronounced smokey flavor. It completely reminds my taste buds of bacon. I think I am really going to like this beer. Hopefully this beer will be one I like every time I drink it.

I am planning on bottling with mid-October. This should give it more than a month to condition in the bottle before Thanksgiving.

Now, I have 3 BJCP Categories I have to brew before the end of the year:

I'm not sure if I will brewing a Porter or a Dunkelweizen next. At the moment, I am planning on brewing the Barleywine last. You can be sure I'll let you know when I brew the next one.
Posted by ESheppy at 9/17/2013 06:32:00 AM