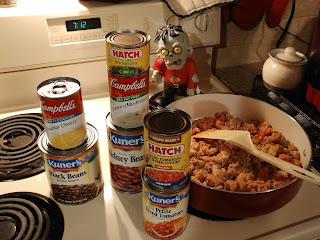 My team at work decided to do a "Chili Cook-off" last week as sort of a festive pre-holiday "team building" activity.

That meant that I had to make some chili Tuesday night.

Generally speaking, I don't follow any sort of recipe when making things like chili. I just throw some things together, and hope it tastes good.

You may recall that quite awhile ago I made Stouticus Chili - icus as part of a work-competition. I thought that chili deserved to win. The judges did not.

Anyway, Tuesday night, I started by looking around in the house for ingredients.

Usually we have a decent supply of canned goods in our basement that make good chili. There wasn't really anything that would work this time, though.

I had to run to the grocery store. Where I got:

*Note: I never measure spices. I just dump how much feels right into my hand on throw that into the mix. Then, I taste and adjust as needed. It works out well for me, but it does mean you'll have to use your own judgement and probably won't end up exactly the same as me.

Then, I:
Browned the ground sausage
Cut up onions
Combined everything in crock-pot, spiced as I thought would be delicious *
Stored crock pot in fridge for a few hours
Cooked for about 4 hours on high, tasting and adding spices as I thought was needed *
Loaded crock pot into car and drove to work
Spilled about 1/3 onto my floor mat, because I hit the brake stopping for an idiot driver.
Set crock pot on low until tasting and judging
Cleaned floor mat. 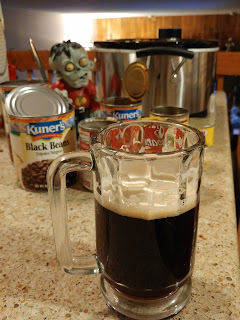 Yes, my chili won the vote.

After round 1, my chili and another were tied. So, there was another round of voting with just these 2.

Mine was my favorite, and I think it deserved to win. Every one of the entries was delicious, though. It was a great Cook-off.

I won this stylish chili-necklace as a trophy. You can bet I wore that for the rest of the day and into the evening. 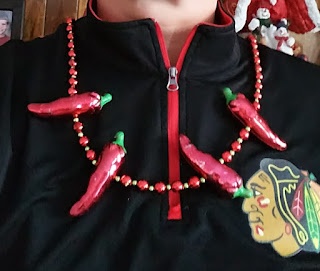 I didn't really have any left-over, and my family wanted to try it, so I had to make it again Sunday.

The Sunday batch ended up being a bit different because King Sooper was out of the Cheddar Cheese Soup and Hatch Chilies. Obviously, my policy on spices * also adds some variability. 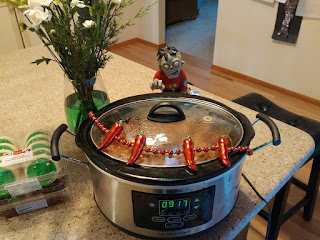 It turned out pretty good too, although I think the competition chili was better.