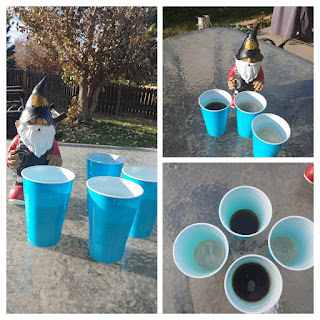 When I kegged Lithuanian Autumn Ale, and tasted the sample of the beer, I thought "Wow ... that really tastes a lot like Falling Leaves Autumn Saison".
A couple days later, on election day, I thought I'd run a blind triangle test on myself between these two beers. 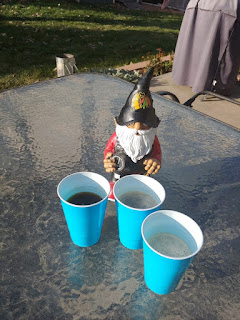 To do the blind taste test, I took 4 cups. Two of them, I wrote "1" on the bottom and filled with Falling Leaves Autumn Saison. On other two, I wrote "2" on the bottom and filled with Lithuanian Autumn Ale.
Then, I closed my eyes and moved the cups around long enough that I had no idea which cup was which.
I separated three cups from the other 1. Out of those 3, the blind taste test was to see if I could identify the 1 that was different than the other two.
As you might see in the photos above, the Lithuanian Autumn Ale had less carbonation and so were visually different, so I purposely kept my eyes closed.
It was easy to tell them apart .. but they were close enough that I thought the difference might simply be the carbonation level. 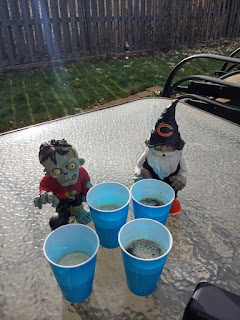 This being the case, I tried the blind taste test again after the  Lithuanian Autumn Ale was more fully carbonated.
This time, I still was able to identify the odd beer ... however, I was not all that confident that I had it correct. I could have talked myself out of the one I picked as the odd beer.
When I know which beer is which, they taste similar, but I feel like I'm easily able to taste the difference. I feel like I can taste the hops and French saison yeast flavor in Falling Leaves. I feel like the Lithuanian Autumn tastes more malty and fuller bodied.
Eyes closed ... blind to which is which ... I'm not so confident that I'm tasting those differences.
It is interesting how pre-conceived "bias" factors into how beers taste. Knowing what I'm drinking somehow highlights the flavors that I "know" are in there. 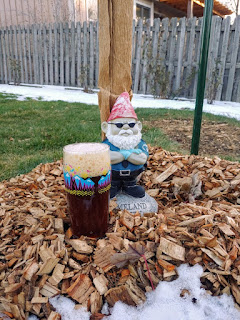 Anyway ... nothing real interesting here. I like drinking these beers. They honestly won't last too much longer.
I'm continuing to brew and drink more beer.
That's it for now.