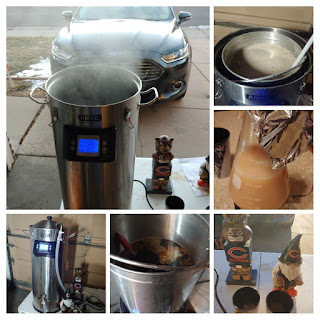 Back in 2011, I came up with a recipe for Stouticus American Stout as sort of a company beer for the start-up that I worked for.
I brewed it a second time after we were acquired and joined a new corporation.
I really liked how it turned out. I'm not sure why I never tried to make it again after 2011.
Anyway ... fast forward to 2020, and I added the Stouticus to my Homebrew 6 Pack list as a beer that comes pretty close to Left Hand Milk Stout.
And since in 2020, I brewed the 5 other beers on the "6 Pack Project" ... the beginning of 2021 seemed like a good time to get Stouticus brewed again.
If you follow this blog, you know that I brewed Arctic Vortex on the 1st.
At the same time I picked up ingredients for that brew day, I picked up my ingredients for
Stouticus American Stout 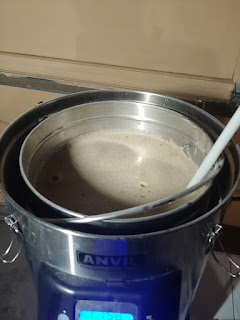 And, I brewed it last Sunday.
If you actually read Arctic Vortex (Batch 277), you know that I received a Recirculation Pump Kit to go with my my Anvil Foundry. I'm still learning how to use it most effectively.
This brew day was an opportunity to use it again.
As I've shared before, perhaps my favorite feature of the Foundry is that ability to set a timer to start heating the mash.
I filled the foundry the night before with water and the salts. By the time I woke up, the water was at the perfect strike temp. 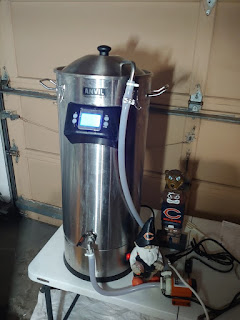 So, by 5AM, I was mashing, after waking up minutes before.
Right after adding the grains, I started the pump a few minutes to stabilize the mash temperature across the whole grain bed.
More to play with the pump kit than any other reason, about 20 minutes into the brew day, I decided to rise the temperature to 154.
In about 10 minutes, I checked and the controller and the floating thermometer both read 154.
So, that works pretty good.
A little while later, I did the same thing to rise the mash from 154 to 158. It also worked great. 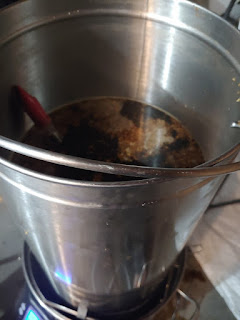 When it was time to get the grain basket out, I discovered I had made the mistake of placing the unit too high on a table. I tried, but was unable to cleanly lift the basket with the grain and water in it to the top.
Eventually, I gave up and moved the whole thing to the floor, but not before I stirred up the grain bed up, with did result in grain in the wort.
Not a huge deal, but not ideal. Next time I'll remember to leave the thing on the ground until after I lift the basket oiu. 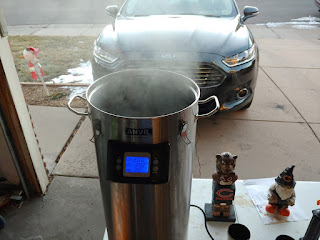 I ended up with a volume a little low and a pre-boil gravity higher than planned. So, I ended up adding water to dilute the wort.
My mash efficiency is pretty consistently higher than planned. This is a good thing.
I started the boil timer at around 7:25. I decided to not use fermcap and see how it turned out. Turns out I don't need fermcap on a 120 volt boil.
I got everything added to the boil as planned. 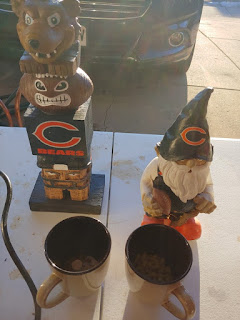 An hour later, I was chilling.
It only took me 10 minutes to chill the wort from boiling to 59 degrees. I didn't even need the pond pump / ice water set up.
The yeast was pitched and the fermentor was in the basement before 9AM.
I did some clean up. I added water to the foundry to heat while I went on a bike ride. 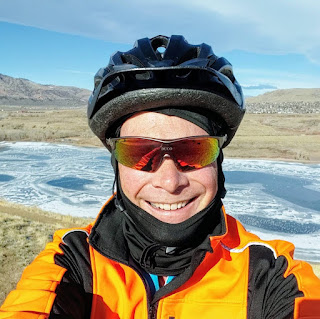 After the bike ride I finished the clean up.
The fermentation was going strong by the end of the day. Assuming a keg frees up, I should be drinking Stouticus before my birthday in February.
I'll be sure to let you know how it turns out.
As always, stay tuned on the regular SheppyBrew Channels to see what is happening with beer and other things: SheppyBrew's Facebook Page; Sheppy's Twitter Feed; SheppyBrew's Instagram Page; and SheppyBrew's Website.