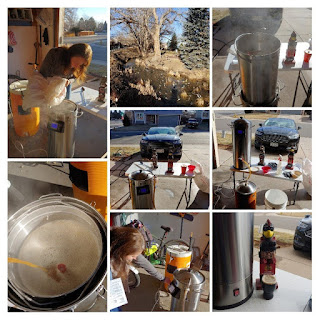 Mardi Gras is less than 3 weeks away! Can you believe it?
I am trying to make even more lagers this year, and the realization that Lent was so close made me think about the Bock I made back in 2019 as a Lent beer ... Mardi Bock.
It was one of those beers that both the Beer Model and I liked a lot. When I mentioned it to her, she was pretty excited that it was coming and even said she'd help brew it.
So ... last week, I modified the recipe to a bit to tailor it to the Anvil, and picked up the ingredients.
On Saturday, we brewed the beer.
Mardi Bock
It was a nice enough day that I would have preferred to brew outside on the patio, but when I asked  the Beer Model, she indicated that she wanted to brew in the garage.
So ... of course that is what we did. 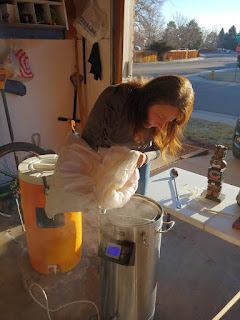 Obviously when the Beer Model brews with me, we have to start ridiculously late in the day, so we didn't get started until 8:30, but I did heat up the strike water so that when she was up and ready to go, we could start by mashing in. 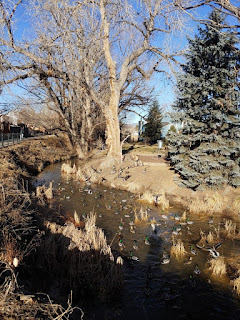 Just for the fun of it, I started "recording" a walk on Strava during the brew day. I took a few mini-walks during the mash to get in some fitbit steps and to get the distance up on the Strava walk. 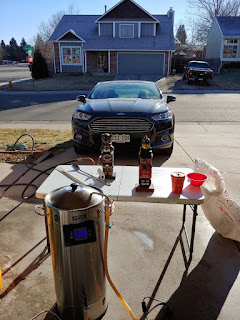 The Beer Model performed the "steps" and helped me through the mash, but had something else she had to do starting at 10 ... which just happened to be about when the boil started. 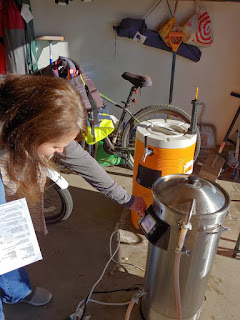 The pre-boil gravity was low enough that I decided to add about half a pound of DME to compensate. Both of us read this on the refractometer. 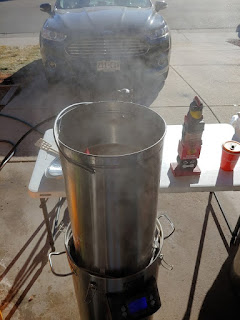 However, after the boil, my OG was about half a pound worth of gravity point high. Not sure what that was about. I'm fairly certain we both read the refractometer correctly for the pre-boil gravity, but I'm even more confident that the OG measurement is accurate.
Obviously this is ok. It just means the beer will be a little higher in alcohol than I had planned. I'm just not sure why 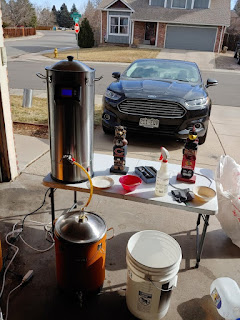 I had the beer racked into the fermentor and the yeast pitched around noon. Things were mostly cleaned up by 12:30.
4 hour brew day. It seemed longer ... I think because we started so late.
I even got a bike ride in. 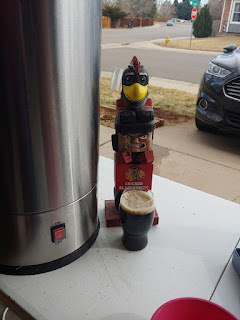 The goal is to get this beer tapped by Mardi Gras, the beginning of Lent.
I'll be sure to let you know how it turns out. I'm pretty certain it will be awesome.
As always, stay tuned on the regular SheppyBrew Channels to see what is happening with beer and other things: SheppyBrew's Facebook Page; Sheppy's Twitter Feed; SheppyBrew's Instagram Page; and SheppyBrew's Website.