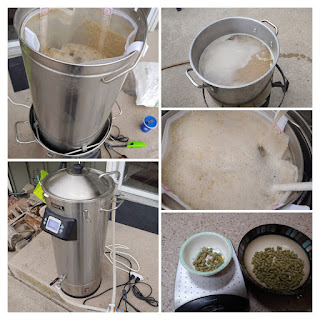 I was going to brew Sunday. Then I didn't.
I actually had Monday off work, so on Sunday I thought I was going to brew Monday.
Later on Sunday, I decided that I wouldn't brew the next day.
I was on a walk Monday morning when I thought that it was silly to not brew on my day off.
And then I decided to brew.
If I had followed through with the original plan, I would have done an over-night mash, so by waffling like I did, I totally engaged in the kind of delay I complain about when the SheppyBrew Beer Model brews with me.
Oh well.
I had the ingredients all ready for ...
Galena Dave's Pale Lager 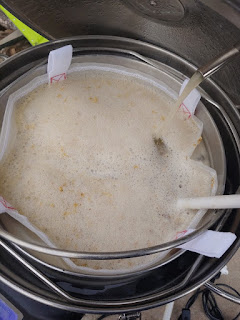 So that is what I brewed. Sort of.
Last time I brewed Galena Dave's, I thought I 'd like to try the beer without the wild hops that come from by Brother-in-law's yard. This was my first time brewing it with only Galena hops. 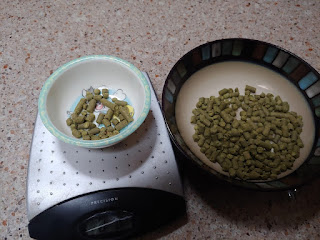 It was 8:45 when I got started ... at least a couple hours after my usual start to a brew day. More like 3 or 4 hours after I generally like getting started.
To help save time I got out the propane burner, and heated up part of the strike water with fire. I mashed in by 9:05. 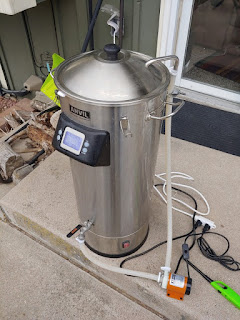 I did my usual mash on the Foundry, so it was around 10:30 when I started draining the wort basket.
To help speed up the process, I emptied a couple gallons of wort into a kettle and boiled on my propane burner, pouring it back into the Foundry once it was boiling. 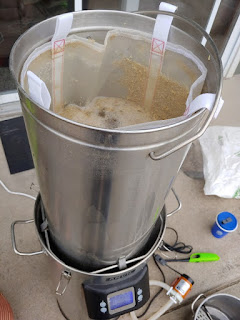 After the boiling wort was in there, I took a gravity reading and noted the volume.
I was high on pre-boil gravity and low on volume, so I diluted with water, but instead of adding straight to the foundry, I boiled the extra water on the propane burner along with a little of the wort.
It was around 10:55 at this point and the wort was at 187.
By 11:10, the wort in the Foundry was boiling. My pre-boil gravity was right on the planned 1.047. 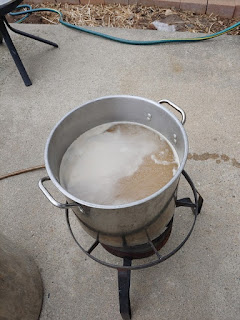 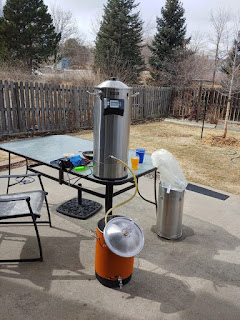 And, now I'm waiting for the yeast to start working. The temperature of the wort is around 50 degrees.
I should be drinking this in 2 to 3 weeks.

I'm looking forward to it.