It has been awhile, but in Updating the Colorado 6 Pack, I mentioned that I was updating my Homebrew Colorado 6 pack, replacing 3 beers that no longer exist.

Next up ... I want to try to make a beer inspired by another one of my local favorites ... Copper Kettle Mexican Chocolate Stout. 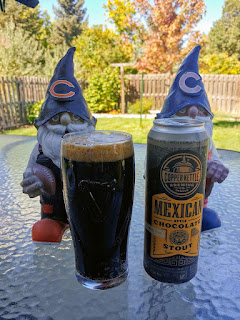 I sat down with one of these beers on my patio a couple weeks ago to think about how I would design a tribute to this beer.

We know from the website and/or the can of beer, that Mexican Chocolate Stout is 7% ABV and 50 IBU and contains Cacao nibs. Cassie cinnamon. Dried chili peppers.

Our eyes tell us it is a very dark black beer with a fluffy tan head.

The aroma was mostly chocolate with maybe a hint of cinnamon.

It has a rich chocolatey flavor with a full body. It wasn't overly roasty or coffee like.

There was a subtle heat from the peppers / cinnamon. To me, the cinnamon flavor came through more than the pepper flavor. 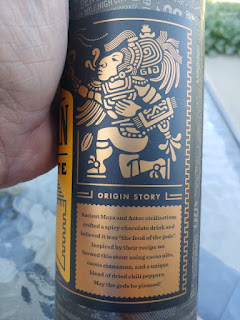 I decided that I'd also add in half a pound of lactose. Mostly because that is how much I have right now. I might have decided to leave it out if I didn't actually have any.

I added in English Medium and Dark Crystal malt and a little Roasted Barley. Most of the color comes from Midnight Wheat to cut down on the roasty / coffee flavors.

For the yeast, I went with Irish Ale Yeast ... mostly because I have some harvested, but I also think it will work well in this style of beer.

We'll see how it turns out. Hopefully I'll like my beer as much as I like Copper Kettle Mexican Chocolate Stout.

I don't have the beer recipe on the website, yet ... but it will likely look like the recipe below.

Stay tuned on Sheppy's Blog: Caliente Fuerte to see how it turns out.

Recipe Notes
Make 6 cup starter a couple days before brew day.
Brewing salts in the mash water. This should bring Denver water profile (as defined by BeerSmith) to
Ca=70,Mg=14,Na=21,SO4=72,Cl=91,HCO3=104
Mash and boil as instructed.
Chill as close to 60 degrees as possible.
Add cocoa and spices into primary fermenation.
Keep fermentation cold until signs of fermentation start. Then let go to ambient temperature.
Add to keg with Cinnamon Sticks.