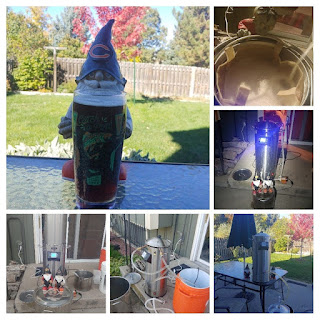 If you were paying attention to the SheppyBrew Instagram Feed, you know that I brewed this past Sunday.
This was my 23rd batch of beer of 2021, and my 9th lager of the year.
It was the 28th batch that I've brewed on the Anvil Foundry.
It was my 299th batch of beer that I've brewed since I started this whole homebrew thing way back in 2009.
My past few batches have been very Autumn themed.
Rocktoberfest Lager (Batch 296)
Will-o'-Wisp Pumpkin Ale (Batch 297)
Falling Leaves Autumn Saison (batch 298)
I thought it was time to brew something lighter and drinkable. I decided to brew an American-style lager.
Mr. Awesome Merican Lager 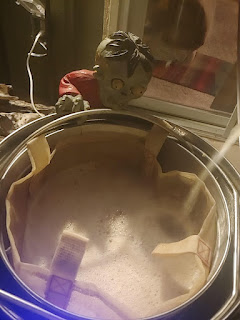 Mr. Awesome was inspired by New Belgium's Mountain Time Premium Lager, which is a beer we've had in our fridge quite a bit lately.
It's a light colored, drinkable American lager with a bit more hop flavor than your typical BMC beers. 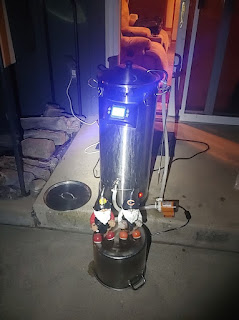 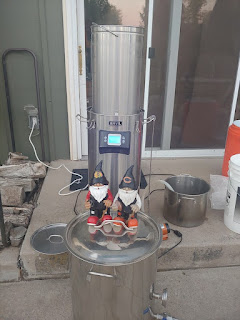 The brew day went pretty well. I set my timer to heat up the strike water while sleeping, but it wasn't quite to the right temperature when I got up. I'm not sure if I miscalculated the time, or if it was just too cold over night. I guess either way, next time I should give more time.
It was half an hour or so before I was able to start the mash. 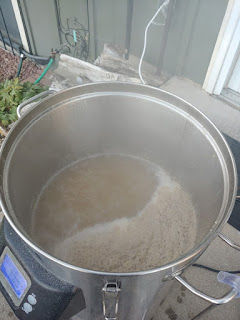 My pre-boil gravity was right on plan with a little higher than expected volume.
The boil went good. I remembered to add ingredients when I had planned them. 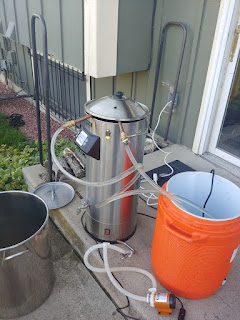 My OG was right on plan too.
I chilled a few minutes with the hose and then switched to recirculating ice water. 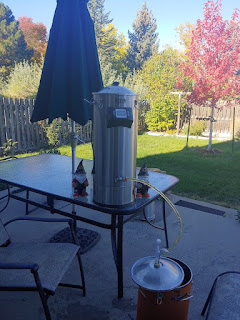 I got the ice chilled into the 50's and racked into the fermentator. I ran the cooling system for awhile before pitching the yeast at about 55ish.
Now, I'm waiting for the yeast to do its thing and turn the wort into beer. 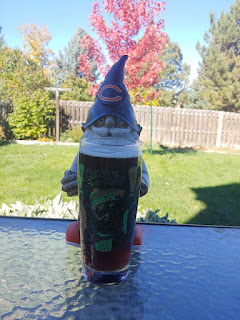 I'll be sure to let you know how it goes.
As always stay tuned on the regular SheppyBrew Channels to see what is happening with beer and other things: SheppyBrew's Facebook Page; Sheppy's Twitter Feed; SheppyBrew's Instagram Page; and SheppyBrew's Website.Of course, don't forget to visit this blog often as well!


After the brew day was a real disappointing afternoon of football. Both the Bears and the Broncos lost.
Both teams need to start winning some games if they want to make the playoffs.
I can only hope.
Take care everyone.
Posted by ESheppy at 10/19/2021 05:44:00 AM