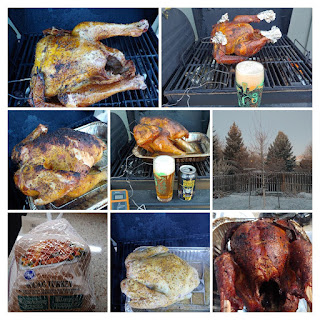 This past Thursday (yesterday) was Thanksgiving.
The Sheppy Family generally eats turkey on Thanksgiving.
Weird ... right? (no not really)
Since 2018 ... I've been in charge of cooking the turkey (see Cherry Wood Smoked Thanksgiving Turkey).
It generally turns out better smoking it on the grill than in the oven. Plus, it is one less thing we have to juggle the plans around what gets cooked in the oven.
Plus, I really enjoy doing it.
So ... 2021 Thanksgiving was my forth time smoking the Thanksgiving turkey.
YUM!
At some point, my wife picked up a 14 pound frozen turkey from our local King Sooper. The kind that is always on sale this time of year.
As in previous years, I brined the bird on Wednesday. 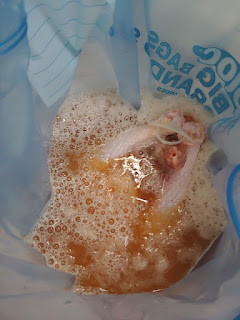 I heated 1 Gallon Water with 3/4 Cup salt and 1/4 cup Garlic Powder. After the salt and powder dissolved, I cooled the brine with ice.
I put the turkey in a big 10 gallon zip lock bag inside a bucket.
Then, I added about a gallon of beer. I added enough water to make sure the bird was submerged.
I put ice on top and left it in the garage over night. Luckily it was cold enough in the garage to keep the bird safe, and the ice was still there in the morning. 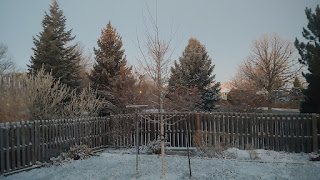 Early on Sunday morning, I pulled the bird out of the brine and dried it off.
I liberally applied lemon pepper as a rub, and put the bird on the same Turkey Canon Roaster that I have used in years past.
I let the turkey sit in the garage until it was time to put on the grill. 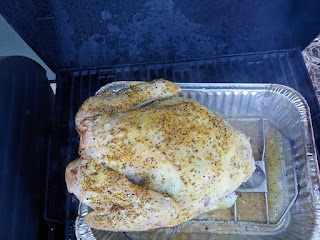 Around 8:10, I added a chimney unlit charcoal to the fire box with chunks of cherry wood. I also lit 3/4 of a chimney of charcoal.
Around 8:20, my lit charcoal went into the fire box.
The bird was on around 8:35. I started off with the turkey "upside down" ... the back up and the breast facing down. 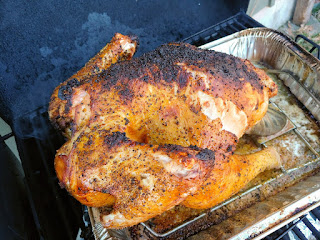 Then, I just let it cook for a couple hours, playing with vents and adding charcoal and wood as appropriate.
The grill temperature was pretty consistent between 320ish and 340ish for that first couple of hours. 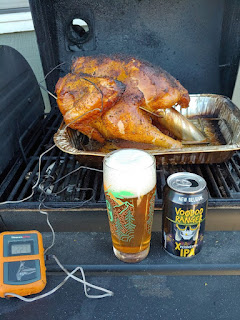 Around 11:00, I took the turkey off the roaster and "flipped the bird". When I did this, the Internal temperature probe got moved and showed a lower temperature (by about 15 degrees).
At this point, I collected drippings for the gravy. 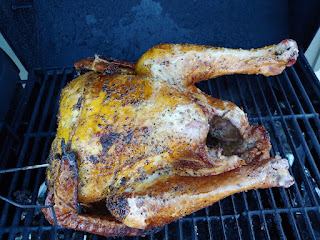 Then, I just let it cook.
At some point, I made the gravy. 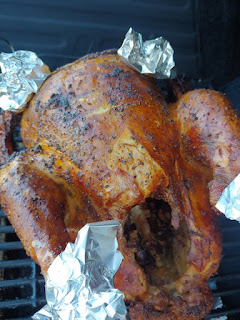 Around 12:30, the internal temperature probe read 161 in the breast, and I took the bird off.
I let it rest around 20 minutes before slicing. 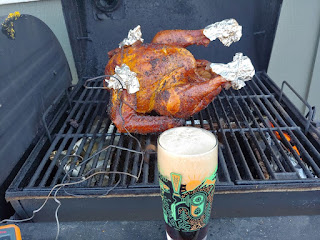 The bird was really visually beautiful.
It probably could have come off the grill earlier. It was juicy enough, but not as juicy as I remember 2020's turkey. 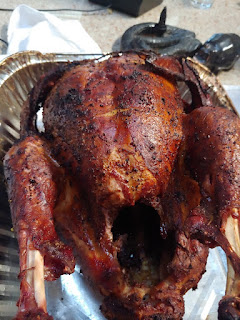 Regardless, we had a wonderful Thanksgiving feast. I even got to watch the Bears beat the evil Lions.
As always, I ate too much.
Early the next day, I was on my bike trying to burn off some of the extra calories I had on Thanksgiving day.

I'm sure I'll cook the turkey next year as well. Chances are pretty good I'll blog about it again. If you look at Sheppy's Blog: Turkey, shortly after Thanksgiving next year, you'll know for sure.